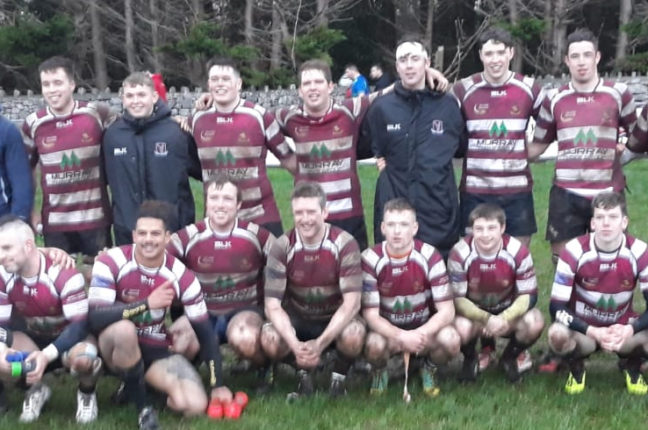 Creggs recorded a superb away bonus point victory over Monivea in a titanic battle at their Castle Grounds in Saturdays crucial J1 League encounter.

A pleased Creggs team after defeating Monivea RFC away with a 4 try bonus point.

Having already defeated Monivea 18 – 8 in a tight contest at The Green just a fortnight ago, this was always going to be another difficult fixture for Pat Cunningham’s rapidly improving Creggs squad.
And so it proved with the outcome hanging in the balance until a late flurry saw Creggs home in convincing fashion. Creggs dominated early possession and territory but could not break down the strong home defence.
It was totally against the run of play when Monivea went ahead with a breakaway try in the 21st minute on a rare foray into the Creggs half. Creggs responded with some rousing play which led to a fine try by flanker James Brandon following excellent interplay between forwards and back.
Creggs welcomed Australian winger Elliot Jennings back for his first game of the season and his initial surge down the left wing played a key part in unlocking the Monivea defence in the buildup to this try. Quick hands by the Creggs backs created an overlap which Brandon finished off with aplomb as half-time approached.
The opening exchanges in the second half were frenetic as both sides struggled for ascendancy. A superb kick by Creggs out-half Shane Dowd put the home team on the retreat and from the resulting line-out Creggs attacked down the blindside, creating an overlap which culminated in a penalty try when a Monivea back was adjudged to have deliberately knocked on. To his credit the referee had no hesitation in going under the posts to award a vital seven pointer to Creggs.
Monivea continued to carry the fight to Creggs but a superbly marshalled defence held out in the face of ever increasing pressure. Creggs tackled with great determination all over the park and broke away for another excellent try by James Brandon in the 63rd minute to lead by 17 to 5.
However shortly after, Vinny Nally finished off a strong drive by the Monivea pack with a try with ten minutes remaining and a good conversion by Ger Fahy left the game delicately poised as 17 to 12.
The final try in a rip-roaring contest went to Elliot Jennings who demonstrated great power and pace when he outstripped four Monivea defenders for a magnificent individual try. Mark Brandon’s well judged conversion was the final score in a match that has finally declared Creggs as serious contenders for the top J1 title.
Having only gained promotion to this league in March it is great to witness the progress which has been made so far but there are still many tough challenges ahead. On a day when each and every squad member made a vital contribution to this victory, the Creggs forwards laid the foundation with excellent line-out and strong scrummaging against the imposing Monivea pack.
The front-row got through an enormous amount of work with Aidan Leech, Sean Higgins and Eoghan Farrell to the fore throughout. Farrell has really came of age with a highly impressive display, while Tom Oates line-out work was top class and Brian Donoghue was tireless around the park. In the back-row, Brian Diffley was immense carrying ball to great effect and punching holes in the Monivea defence at every opportunity while James Brandon complemented him with an all action performance underlined by 2 tries.
At number 8, Kevin Brandon was equally effective as his two colleagues and that speaks volumes for his contribution.
The half-back combination of Mark Brandon and Shane Dowd was very effective, with Dowd steadily regaining full fitness and confidence to provide a vital link to his speedy three-quarters. Tom Callaghan was a tower of strength in the midfield defence while alongside him Eoghan Coyle made serious yardage with some telling breaks which Monivea struggled to contain.
Chris Duignan also impressed with some powerful tackling and running while Ronan Dowd was unerring in defence and dangerous in broken play. Elliot Jennings fitted seamlessly in to the backline and showed his pedigree with his late match-winning try. Luke Meehan was strong and competitive, and tackling very well when called upon.
Creggs Rugby: Ronan Dowd, Elliot Jennings, Eoghan Coyle, Tom Callaghan, Chris Duignan, Shane Dowd, Mark Brandon, Aidan Leech, Sean Og Higgins, Eoghan Farrell, Brian Donoghue, Tom Oates, James Brandon, Brian Diffley, Kevin Brandon (Captain), Mattie Corcoran, Alan Glennon, Edward Clinton, Luke Meehan, and Oisin McConn.

Next up – Cawley Cup Final this Sunday in Galway
Creggs take a break from League action until January but face arch rivals Castlebar in the Cawley Cup Final in Galway (at Glenina – Glaswegians grounds) at 2pm on this Sunday (Dec. 16th.).
This is another massive game for Creggs and hopes are high due to good current form, but Castlebar are always difficult opponents, so it promises to be another tight affair with little separating the teams. A big Creggs support should travel for the first Final of the season, a important Cup completion open to all Division 1 teams.