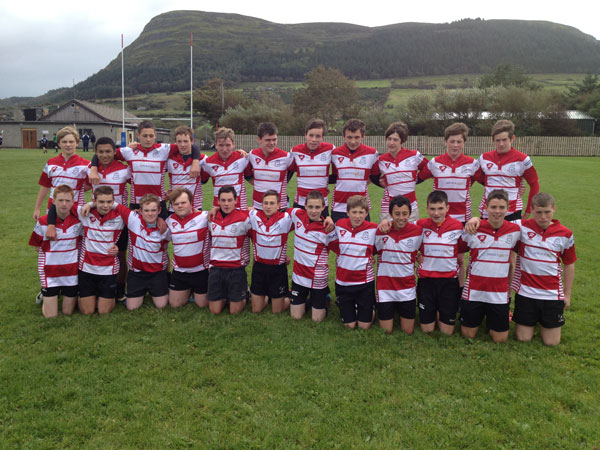 CBS Roscommon have reached the semi final of the Premier League Connacht Schools Junior League after they recorded a 16-3 victory over Summerhill in Sligo Last Thursday Lunchtime. This is a considerable achievement considering this is the schools first year at this grade.

Played in blustery conditions, CBS had the better of the opening half playing against the wind and had a number of chances from penalties inside their opponents half but could not break down a committed defence. It took the home side 20 minutes to get into the CBS 22″ and they took 3 points on offer when CBS were caught offside at the breakdown. CBS came back strong and with almost the last kick of the first half Michael Farrell levelled the scores with a good penalty against a strong wind.

In the second half CBS continued to attack and a second penalty from Michael Farrell gave CBS a 6-3 lead and really they should have added to this score before Eoghan Coyle touched down with 12 minutes to go which was converted by Michael Farrell giving CBS a 13-3 lead.

CBS were moving their opponents around at this stage, upfront Sean Doorly, Darragh Beirne, Michael Feeley, James Brandon and captain Brian Diffley were carrying well and out wide Conor Shanaher, Shane Purcell , Jason Hoare and Niall Cunniffe ran at their opponents when the opportunities arrived. CBS had a number of opportunities to add to their scores however the game was only made safe when a final penalty from Michael Farrell 5 minutes from time wrapped up the scoring to leave the final score 16-3.

CBS will play the much fancied St Josephs Galway in the Semi Final next week.