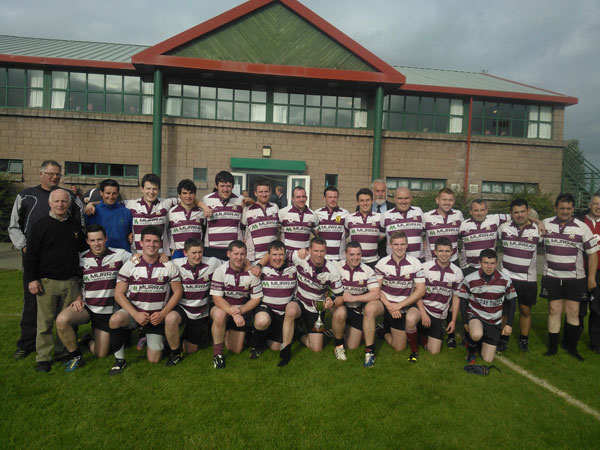 Creggs continued their recent good run with a deserved win over Loughrea at The Green on Sunday. It was however nip and tuck all the way and only a late try from hooker Enda Garvey sealed victory for his side.

Played in relatively benign conditions following a morning downpour the first half was a tale of six penalties, four falling to Loughrea but their prodigious kicker Conor O’Regan was off target with two of his efforts whereas Mark Brandon took both his opportunities, the second a particularly impressive effort on the half hour.

Thus the sides turned around 6-6 at the interval. With the wind whipping up in his favour Creggs full-back Emmet Collins pinned Loughrea in their 22 with two well judged kicks to the left corner. The resulting line-outs laid the foundation for a period of sustained Creggs pressure which ultimately yielded a well struck drop goal from Brandon in the fifth minute. This lead was short-lived however with O’Regan landing a monster penalty into the wind to again level the scoring. The game was turning Creggs way however with most of the play now in their opponents half and following a trademark drive by the impressive Peter Lohan Loughrea were penalised for Brandon to land his third penalty of the afternoon. Loughrea immediately hit back and with the elements now back to neutral surged upfield to pound the Creggs line but the Creggs defence was once more unyielding and Ronan Kelly’s relieving clearance meant the visitors came away empty handed.

The game entered its final 10 minutes with Creggs in control but still protecting a narrow lead before Brandon fed Tom Fleming and the powerful second row stormed through with Garvey on his shoulder to score the crucial try which Brandon converted to clinch the victory. Creggs continued to press and with the last kick of the game Brandon slotted over a fourth penalty to cap a 100% return from his boot which yielded 17 points for his side.

There are no league matches this weekend which comes as a welcome break for Creggs with a number of key players carrying injuries, next league match is on Saturday 02 November away to Ballyhaunis at 7 pm.