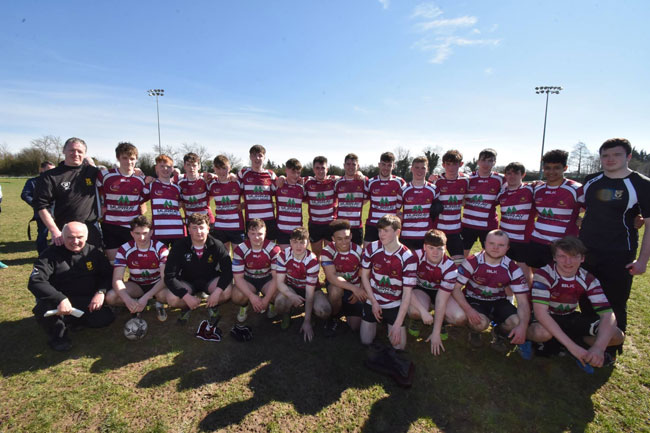 After establishing their credentials as the top team in Connacht rugby this season so far at the 18.5 year age-group (this combines both the top U-18 and U-19 in the province) by winning the Connacht Division 1 League, Creggs travelled to Galway on Sunday evening last to play a strong Galwegians RFC side in the Connacht Cup Quarter-Final and emerged victorious by 18 points to 14, with some good teamwork and quality rugby.

Creggs Under-18.5s, the Connacht Division 1 League Champions, who defeated Galwegians RFC in the Quarter-Final of the Connacht Cup on Sunday last. Missing from this picture is James Brandon.

Following their last outing, winning the Connacht League Final v Corinthians RFC, this was a tough away game start their Cup campaign. Games between these two teams have been very close over the last few years and Sundays encounter proved no different with Creggs coming out on top on this occasion.
Galwegians started the game very strongly and were fierce in their defence and put pressure on Creggs who were finding it difficult early on to exit their half playing against the wind.
However as Creggs grew into the game , Ronan Cahill, Rian Biesty and Melvin Conteh were now beginning to get over the gainline and they used their backs to run the ball well getting into their opponents half and were rewarded when Shane Purcell kicked a penalty after 17 minutes to put them ahead and again on 22 minutes from a similar position to give Creggs a 6-0 lead.
Galwegians gathered the resultant kick off and a miscommunication in defence from Creggs allowed them to touch down under the posts which was converted to give Galwegians a 7-6 half time lead.
Creggs had their best spell early in the second half and upfront David O Gorman and Brian Maloney were securing good set piece ball and outwide Dara Byrne, Jason Hoare and Mairtin Quinn were now getting some freedom to run the ball back at their opponents.
Creggs were rewarded for some enterprising play after 13 minutes when Ronan Dowd finished well, touching down in the corner. He converted it himself with a great kick to regain the advantage for Creggs.
Again after 18 minutes, James Brandon did very well to score in the same corner to give Creggs a 18-7 lead,
Creggs looked comfortable at this stage and the game looked like it had been won but Wegians to their credit did manage to go upfield to get another score which they converted to reduce the deficit to 18-14 with 5 minutes remaining.
In the final minutes Creggs played smart rugby and held out for an important win.
Creggs: Aaron Glennon, Melvin Conteh, Dan Butt, Brian maloney, David O Gorman, Rian Biesty, James Brandon, Ronan Cahill, Eoghan Coyle (C), Shane Purcell, Jason Hoare, Dara Byrne, Cian Gately, Ronan Dowd, Mairtin Quinn, Matthew Curley, Ian Conlon, Amuray Duarte, Edward Clinton, Aidan Conneely, and Oisin Keenan.
Connacht Cup Semi-Final
Creggs Under-18.5’s will now be out again Wednesday, away against Ballina RFC in the Connacht Cup Semi Final. The match is set for 12 Noon. Because he lads will be missing a few guys from the win over Wegians but hope to continue their excellent recent run.