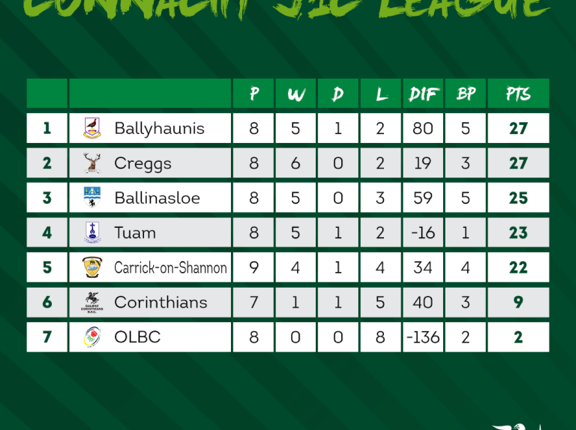 The Creggs Development team defeated Ballinasloe by the narrowest of margins in Saturday’s thrilling J1C league game on the 4G in Creggs.

Ballinasloe led by 15-9, until Ronan Cahill burst through for a tremendous try for Creggs in the last minute of normal time to leave the outcome of the contest hanging on the difficult conversion.

Mark Brandon called on all of his experience to drill a superb kick between the posts for a dramatic victory which puts Creggs joint-top of the table with four games remaining in a tight competition, that has five teams still in contention for the top spot. Ballinasloe, Tuam and Carrick-on-Shannon are all hot in pursuit of Ballyhaunis and Creggs, with only five points separating all five sides.

Creggs led by 6 points after 15 minutes thanks to two well struck penalties by Mark Brandon. The home side then conceded a try by Paddy Grehan, who found a gap in the home team’s defensive line.

Michael Holland was late tackled in the final play of the opening half and Brandon kicked the ensuing penalty to give Creggs a narrow 9-5 advantage facing into a stiffening breeze in the second half.

Ballinasloe piled on the pressure from the restart and scored after 48 minutes when centre Jamie Curley sailed through unopposed from 30 metres for a soft try.

When Ballinasloe’s scrumhalf Cormac Finn added a third try in the 54th minute, it did not look good for the home team. However, fortunately for Creggs, place-kicking proved to be a problem for Ballinasloe all evening as they failed to convert any of their tries in admittedly tricky conditions.

Ballinasloe continued to enjoy long periods of dominance throughout the final quarter but Creggs defended superbly and hit back with some enterprising rugby, asking serious questions of the tiring Ballinasloe team.

The introduction of fresh legs had a major impact on the result, with Creggs gaining momentum from an excellent bench, with all the players introduced contributing significantly. Finally, Ronan Cahill made the decisive breakthrough with the game heading into added time, before Mark Brandon stepped up to seal a magnificent victory for Creggs.

Creggs next game is a potentially difficult away trip to a rapidly improving Carrick on Shannon team, victors over Tuam by 30 points on last weekend.