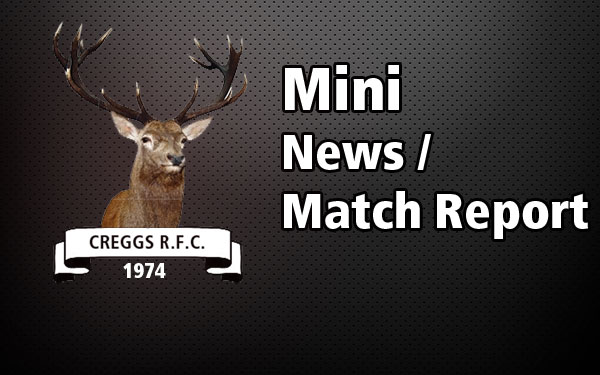 Please note that all Creggs Minis (except the Under-10’s) will have their last full training of the season in Creggs on next Saturday morning (March 24th.). A big turn-out is expected with treats after and also tea, coffee and biscuits in the clubhouse for parents and coaches.

The Under-10’s will be at their Connacht Blitz on Saturday 24th of March in Sligo RFC. Players to arrive at 10am, first game kicks off at 10.30.

Then on this Sunday (25th. March) Creggs Under-9’s have been invited to Blitz in Mullingar RFC.
This is a 4 province blitz in Mullingar RFC, with 500 children, 52 teams from 13 counties, playing on 26 pitches. There will be a coaches meeting at 10.30am in Mullingar, with all players to be there before 10.45am. The first match at 11am. A Bus will run to the Blitz, as parking will be limited at the venue.
Those travelling will be able to see Mullingar’s 3G which will be similar to that to be constructed in Creggs and ready for the start of next season.

Also news that Creggs Under-11’s will play in the Garryowen Rugby Festival on Saturday, April 7th. in Limerick.

New players always welcome in each age-group from Under-7 up to Under-12. Also, we will have news on Girls Mini Rugby in the coming weeks.