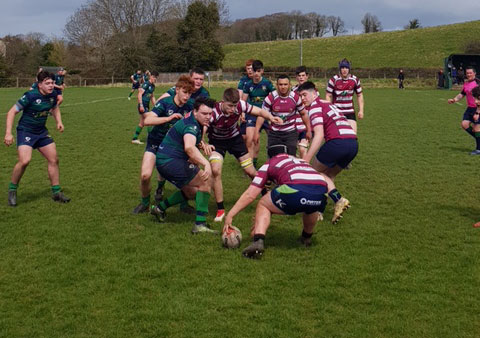 Creggs Under-18.5’s travelled to Ballina last Sunday morning for a Connacht Semi Final against a strong Ballina team, and came away with a 17-13 win after a titanic struggle.

These teams have met in many semi finals over the last numbers of years and always serve up a tight encounter and this certainly was no different with no quarter given or taken by both sides in their pursuit of a final spot.

Playing against the wind in the first half Creggs had to defend for large periods of the and there was excellent defence early on especially from John Martin, John McDonnell and Adam Finnerty in the Creggs back row and also Killian Higgins and Brian Maloney put in some very important tackles in the early stages.

Ballina did take advantage of the wind and converted two penalties after 5 minutes and 12 minutes to lead 6 -0.

Creggs Under-18’s first to the ball in Ballina

However, Creggs started to grow in confidence as the half went on and made their way upfield with great work from Danny Arnold, Melvin Conteh and Mathew Curley and when Aodha Hession fed Tim Lambe, he released Eoghan Coyle who went over for a good try which was converted by Mark Purcell against a strong wind.

With the last play of the first half Ballina turned down a kickable penalty and ran at the Creggs defence but heroic defence from the forwards and also out wide by Mairtin Quinn, Jason Hoare and Kaylem Hollian kept Ballina out and they were forced to turn over the ball to give Creggs a 7-6 half time advantage.

Creggs were now playing with the wind in the second half but in the early stages of the half both defences won out whenever the opponents got into their 22″. Then after 10 minutes Ballina forced their way upfield through their bigger pack and did manage to get a converted try to put themselves 13 – 7 ahead.

Creggs Under-18 flying high in Ballina.

Creggs didn’t panic, which is one of the hallmarks of this side. They kept on the attack and it looked like it wasn’t going to be their day when a long range penalty from Mark Purcell rebounded off the post but Creggs didn’t allow Ballina to exit their 22 and from a resulting scrum Eoghan Coyle went in for his second try, which Purcell converted to put Creggs back into the lead 14-13 with 12 minutes remaining.

Creggs continued to attack and Conor Rohan, Aaron Glennon and Tom Farrell did well on their introduction and when Ballina were penalised on the 10 metre line, Mark Purcell again stood up and slotted the resultant penalty to increase the lead to 17-13 with 7 minutes to go.

Ballina to their credit kept trying to carry through their big forwards but the Creggs defence stood firm and held out for a good away victory.