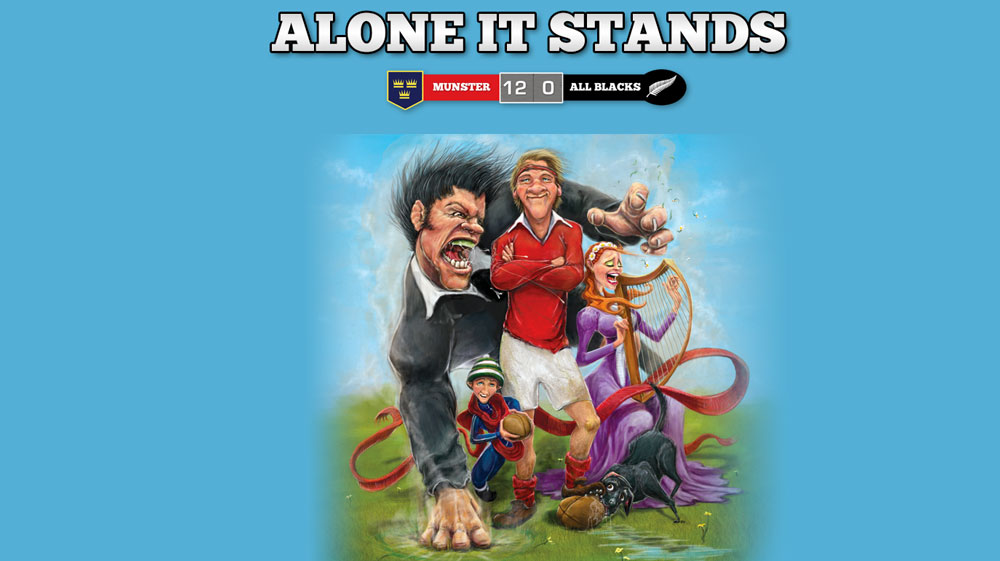 “Alone it Stands” at Roscommon Arts Centre followed by the “Après Match” with Munster hero of that famous night Seamus Dennison in the Hollywood bar, 8pm Wednesday 13th November 2013

This now legendary story (dramatised, written & directed by John Breen) of the 1978 Munster Rugby Team’s historic win over the All Blacks with an astonishing 12-0 defeat, “Alone it Stands” is coming to Roscommon Arts Centre on Wednesday 13th November.

With mesmeric ensemble playing, 6 actors recreate 62 roles in re-telling this story that inspires and perspires in the same evening!

The match was never televised so come along and see for yourself what happens when Munster, the Kiwis, the crowd, the ball, the dog and the pregnant woman all push and shove to create one momentous day.

The spirit of the Munster performance that night was epitomised by Munster’s player Seamus Dennison who set the tone with some huge tackles in the opening stages of the match on New Zealand men twice his size.

“After the Show” with one of Munster’s heroes of that famous night Seamus Dennison in the Hollywood bar , 10pm Wednesday 13th November 2013
Light Refreshments Served. The Creggs RFC special all-in ticket price is €25 and they will be available shortly from Eight till Late Roscommon Town and committee members.