Creggs underage rugby got reward for all their hard work when the Under-15s defeated Sligo RFC 15 – 5 in the final of the Connacht Under-15 Shield. It was played in Ballyhaunis last Saturday..

Losing the toss Creggs faced into a gusting wind, but adopting the proper tactics were able to control the game. Keeping ball in hand through forwards and backs, dealing with the Sligo kicks. James Brandon at stand in fullback impressed, and rucking and tackling well we had more territory.

The set piece was solid and most importantly the Creggs boys gave away no penalties within kicking range. After 12 minutes a good back move brought Creggs into the left corner. After some close in rucks No.8 Edward Clinton forced his way over. Into a strong breeze and out wide out half Michael Farrell nailed an almost impossible conversion to give Creggs a deserved 7 point lead.

Receiving the kick off Creggs forced our way back into the Sligo half and kept our continuity game going. On 22 minutes lovely hands by the Creggs backs released left winger Michael Feely, who on being tackled was able to off-load to the supporting Cliton who touched down for his and our second try. Unfortunately Farrell was unable to convert from another difficult angle.

Turning over for the second half with a 12 -0 lead, the intensity displayed by the Creggs lads dropped due to the great effort of the first half and expecting the breeze to do the work.

Creggs went through a stage of not committing enough bodies to the rucks, missing the odd tackle and generally trying to force the game leading to some sloppy knock ons. Mid-way through the half Sligo forced their way into our 22 and eventually scored an unconverted try.

This was the necessary wake up call and captain Brian Diffley really showed his leadership qualities for the last quarter, rallying his troops to greater efforts. When awarded a penalty 20 meters out Farrell duly added the three points giving Creggs Rugby the two score cushion.

Creggs finished strongly, most noticeably in the tackling stakes with centre Adam Whyte in particular to the fore.

At the end of the final our own Adrian Leddy, the Connacht Branch Junior Vice President had the extra honour of presenting the shield to captain Brian Diffley to the delight of the large support.

The medal presentation will take place in the clubhouse in Creggs on Friday April 26th, time to be confirmed. 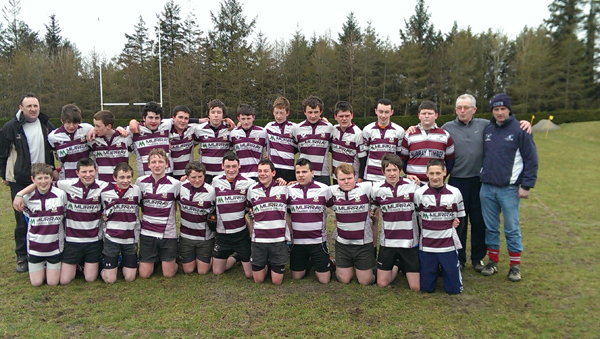