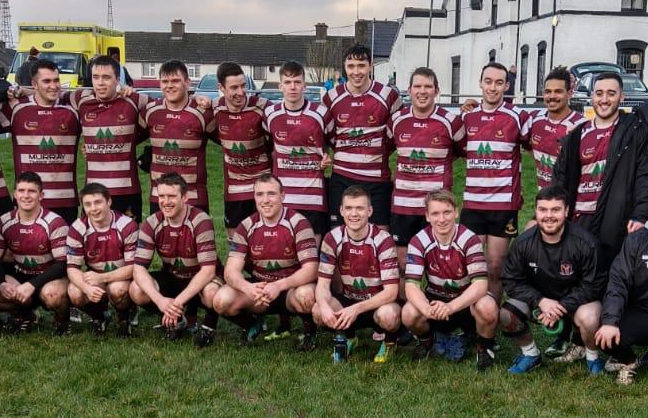 Creggs played in the inaugural Cawley Cup Final, they lost that day to Monivea but 15 years later finally got their hands on the one major trophy which has thus far eluded the Club.

The Cawley Cup is confined to the top eight junior teams based on the previous year’s league rankings and for many of the intervening years Creggs did not even qualify for the competition so this decisive victory over Castlebar, following earlier defeats of junior powerhouses Connemara and Monivea means Creggs are back again at the top table of Connacht junior rugby.

Having performed particularly well in the run up to this game Creggs began nervously but nonetheless opened the scoring in the eighth minute when centre Elliot Jennings crossed in the corner after Brian Diffley and Eoghan Farrell had powered up the middle and Jennings had the pace and power to finish in the corner with Mark Brandon, one of two survivors from the 2003 team nailing the difficult conversion.

Conditions were difficult and Castlebar opted for their favoured pick and go strategy but whilst Creggs had to absorb a significant amount of pressure the defence held. The situation worsened for Castlebar after 25 minutes when their second row Ruairi Hughes saw yellow and just before he was due to resume, Creggs struck again, the second try in many ways a facsimile of the first.

Diffley made the initial break, this time supported by Kevin Brandon, the other link to the 2003 team and now in his second innings as club captain and when the ball was spun out wide full back Ronan Dowd ran a perfect line to elude the defence, this time Mark Brandon’s conversion attempt rebounded off the post. The teams turned around with Creggs 12-0 ahead and firmly in control.

Five minutes into the second half Shane Dowd added a third try with a magnificent solo effort which effectively killed the game as a contest. From a position on the half way Dowd jinked his way through the opposition, wrong footing the defence and ultimately leaving them in his wake with a blistering turn of pace to touch down between the posts, Mark Brandon adding the conversion.

Castlebar battled right to the end but they could not crack the Creggs defence which, as it has all season, maintained its discipline and afforded their opponents not a single shot at goal.

In the final half hour both sides had some half chances but there were no further scores and Creggs had bridged a 22 year gap since their last top level success.

This is a singular achievement for head coach Pat Cunningham (who also played in the 2003 Final) and his management team, Creggs have now won promotion and claimed both the Curley and Cawley Cups in this calendar year. The team now takes a well-earned break but their quest for the League title resumes on Saturday 5th January in Creggs, again against Castlebar with the first round of the Cup the following week against Sligo, also at home.

These are exciting times for the Club with the grounds development, including the magnificent new all-weather facility coming to a finish.