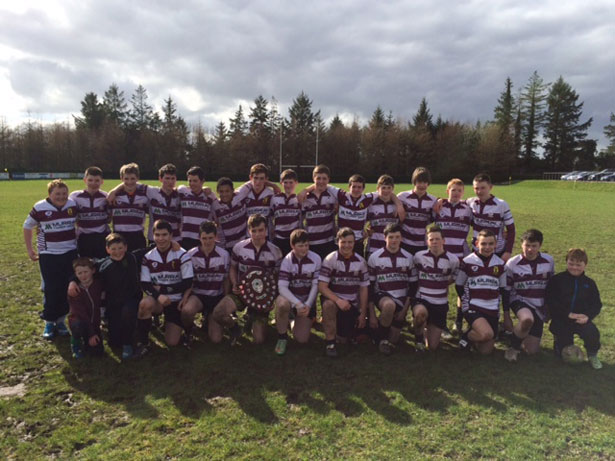 Creggs U15’s have qualified for the final of the Connacht U15 Cup after a very tough encounter against Corinthians RFC in Creggs last Saturday.

A tough encounter was always on the cards between last years double winners Corinthians and this years league Winners Creggs and this one certainly lived up to its expectations.

The first half was a very even encounter and Creggs had the better of the territory but Corinthians looked more dangerous when they got into their opponents 22″. Creggs were doing well at the set pieces and up front Michael Conway, Ian Conlon, David O Gorman and Brian Maloney were doing very well in the tight and the loose. Creggs lost centre Jason Hoare early through injury and Reece Gilligan did well on his introduction as did Eoghan Coyle, Shane Purcell, Cian Gately and Niall Cunniffe and Adam Canny who had to put in tackles on their large Corinthians forwards who ran at them at every opportunity. Creggs had an opportunity with a penalty from Ronan Dowd after 12 minutes however in the wind the ball just drifted wide and the score remained 0-0 at half time.

Creggs picked up the intensity in the second half and were rewarded after only 2 minutes when James Brandon Picked from the back of the scrum and went on the blind side , Creggs continued to carry through Danny Arnold and Adam Finnerty and when Melvin Conteh was popped the ball he beat the tackle to go over in the corner to give Creggs a 5-0 lead. Ronan Dowd was unsuccessful with the conversion but two minutes later he kicked a very important penalty to give Creggs a 8-0 lead.

Creggs had to reshuffle and the squad was tested when they lost both Ronan Dowd and Adam Finnerty through injury 15 minutes into the second half but Daire Byrne and Dylan Crehan were outstanding on their introduction also. Corinthians kept using their big forwards and in the last ten minutes were gaining good territory against the tiring Creggs defence and while Creggs defended bravely eventually Corinthians went over in the corner with 2 minutes remaining, to reduce the deficit to 8-5. There was just enough time for the kick off which Corithians knocked on and the referee blew the full time whistle which was greeted by great relief by both players and supporters.

Creggs will play a Galwegians side in the final who beat Ballinasloe RFC after a replay last Sunday. The date is yet to be decided