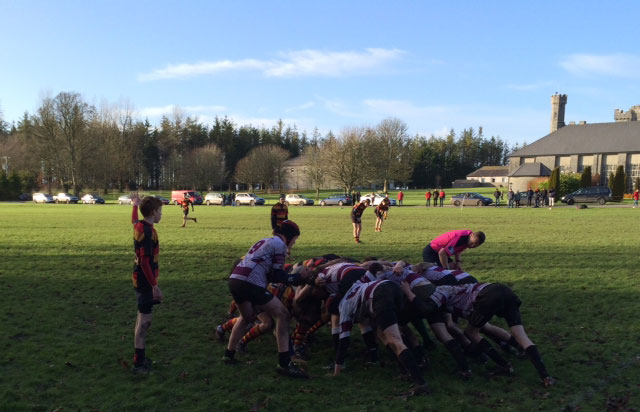 Creggs made it through to the Connacht Division 1 league final with a 29-5 win over Sligo last Sunday. Played in cool but bright conditions it was Creggs who having won the toss played with the elements and took the initiative from early on and pinned their opponents back in their own half.

The opening score came after 5 minutes when Ronan Dowd intercepted a pass from the Sligo scrum half at the base of the ruck to run in unopposed under the posts and converted it himself to give Creggs a 7-0 lead. Creggs continued to attack and great work upfront by David O Gorman, Danny Arnold, Brian Maloney, Adam Finnerty and Michael Conway brought Creggs into the opposing 22″ and Creggs moved the ball wide for Shane Purcell to score in the corner, giving Creggs a 12-0 Lead.

Playing with the strong breeze Creggs knew they would need a good lead at half time and took a penalty opportunity through Ronan Dowd after 20 minutes to increase the score out to 15-0. Just Before half time A great Run by Jason Hoare was carried on by Eoghan Coyle and James Brandon who released Reece Gilligan who was stopped just short and popped to Roan Dowd for his second score of the game to leave the half time score 22-0.

The second half was always going to be more difficult for Creggs playing against the Breeze and they made it hard for the opposition to get easy possession or territory with some great defence and competition at the breakdown. Great Defensive work upfront by David O Gorman, Melvin Conteh, Aaron Glennon and Ian Conlon and in the backs Niall Cunniffe, Cian Gately, Adam Canny, Dylan Crehan dealt with everything that was kicked to them very well when playing into the strong breeze.

This half was played mainly in between the two 10 metre lines however Creggs were unfortunate on a couple of occasions when Danny Arnold, Shane Purcell and James Brandon were all held just short. The opening score of the secondhalf did come with 10 minutes to go when James Brandon Picked from the back of the scrum 15 metres out and beat a couple of tackles to go under the posts which Ronan Dowd converted to give Creggs a 29-0 lead.

Sligo did finish the game strongly and were rewarded for their endeavour when they touched down with a couple of minutes to go for a try leaving the final score 29-5. Creeggs will play Ballina RFC in the final of the League, date to be confirmed.