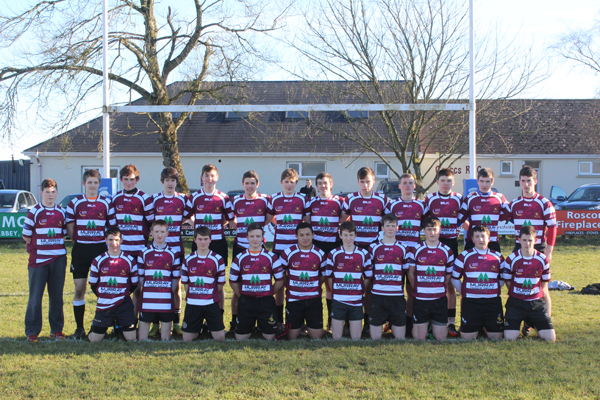 Creggs U16’s qualified for the Connacht Division 1 League final after a victory over Corinthians RFC in Creggs last Sunday afternoon on a scoreline of 20-0. Creggs will play Galwegians RFC in the final on the weekend of 22nd of Feb.

Creggs had the better of the territory in the opening 10 minutes and were doing well out wide in creating spaces only for the final pass to hit the floor when a score looked likely. Creggs did take the lead after 12 minutes when a penalty from Shane Purcell opened the scoring giving Creggs a 3-0 lead. From the kick off Creggs continued to attack and after a series of penalties Creggs had an attacking lineout 5 metres out, a good line out take by David O Gorman gave Creggs the platform to launch a driving maul which was touched down by James Brandon to give Creggs an 8-0 lead after 20 minutes.
Corinthians were doing well in attacking the Ball at the breakdown and turned over the Creggs ball time after time and this gave them a good platform to launch attacks in the final 10 minutes of the first half. After 28 minutes Corinthians drove into the Creggs 22” and moved the ball wide and a last ditch tackle from Jason Hoare stopped a certain try, Corinthians then moved the ball wide on the opposite side of the pitch and looked certain again to touch down but a tackle from Shane Purcell dislodged the ball as the Corinthians player dived over the line and Creggs were able to clear their lines to take a half time lead of 8-0.

Creggs defence continued to be well organised in the second half and around the fringes Danny Arnold, John Martin, Brian Maloney and Daire Byrne were putting in countless tackles and when they turned over the ball Melvin Conteh, David O Gorman, and Ian Conlon carried well up front and out wide Eoghan Coyle, Niall Cunniffe, Adam Canny and Cian Gately were a constant threat. The first score of the second half was always going to be important and it came from a scrum to Creggs on the 22”, James Brandon Fed Ronan Dowd who saw the space and chipped over the defence to gather the ball himself and touch down in the corner for a very well taken individual effort, stretching Creggs lead to 13-0.

Corinthians continued to try and breakdown the Creggs defence, however Creggs were getting stronger in defence as the game progressed and Rian Biesty continued the good work on his introduction. Creggs final score came 7 minutes from the end and came from good defence and a turnover at the breakdown and James Brandon gathered the ball on half way, went on the blindside , beat a defender and then ran half the pitch to touch down in the corner which Ronan Dowd converted to complete the scoring giving Creggs a 20-0 victory.