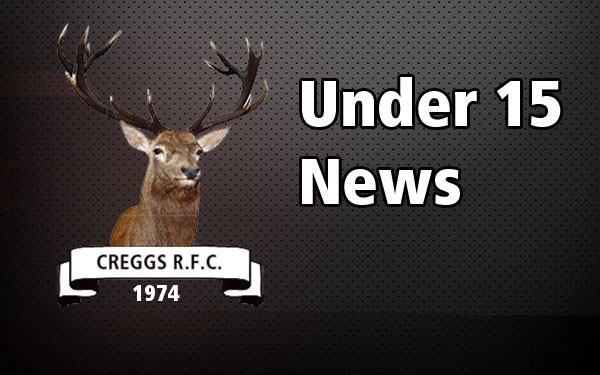 Creggs Under-15’s qualified for the Connacht Under-15A League Semi Finals with a hard fought and thrilling victory over Sligo RFC on the new 4G pitch on the Saturday before Christmas in Creggs.

This was the first occasion for the Under-15’s to play on the recently opened 3G surface and it certainly allowed for a fast game with both teams running in five tries each on the day.

Creggs began the game very well with a try from Noah Fallon converted by DJ Hession but it was Sligo who were in the ascendancy for a large period in the first half and after two tries of their own they lead 14-7 before Oisin O’Beirne scored a penalty to reduce the deficit to 14-10 after 18 minutes of the opening half. Sligo scored another try before again Creggs responded through another Noah Fallon try, converted by DJ Hession to leave the half time score, Sligo 19 – Creggs 17.

Creggs were the better team in the second half with Lee Kilcoyne, Michael McAteer and Ciaran Purcell pominent up front and Cormac Dolan controlling things well at 9. The home team scored tries from Josh Verling, Edimar Fimho and Noah Fallon after good work from Jack Fleming and Senan Lambe and were leading 34- 26 into the final play when Sligo got in for a try to reduce the deficit to 34-31 in Creggs favour.