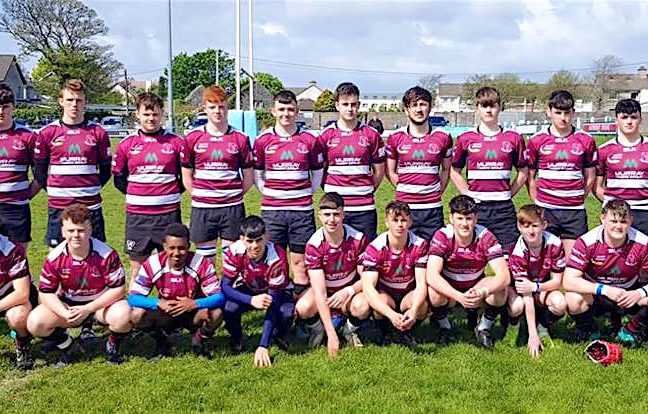 Creggs and Monivea have produced some great battles over the last number of years and last Saturday’s Connacht Under-17 Plate final was no different.

Creggs began the game at a very fast pace and scored early through an assured David Gaquin for an early 5 point lead.

Then after 12 minutes Creggs got in for another try from Ben Finnerty after a great 40 metre run and Mark Purcell converted for a 12-0 lead.

Monivea regrouped and got in for a try of their own afeter 15 minutes but Creggs extended their lead shortly afterwards when Mark Purcell burst over for a try which he converted after good work from Lorcan Maher and Jack Tucker.

Creggs looked to be in a strong position heading to half time but Creggs failed to deal with the kick off and Monivea got in for a converted try to leave the half time score 17-12.

Monivea boosted by the score just before half time, took the lead early in the second half after getting a try which they converted and Creggs found themselves behind by 19-17.

Creggs forwards were working hard and great work from Daragh Kieran and Adam Donnelly in the loose and at the set piece from Ronan Lambe and Ethan Glennon was rewarded when Mark Purcell kicked a penalty after 8 minutes to retake the lead 20-19.

Creggs backs were loving the ball well now and Sean Trundle was moving the ball quickly from the breakdown to allow space out wide for Aaaron Lyons and Naoise Coyle.

Creggs extended their lead after some good work led to a try from Cian Glennon.

Shortly after Darren Gately collected a Monivea clearance and he went straight through several defenders before releasing Mark Purcell for another try which he converted.

It looked like the game was won with the scoreline 32-19 but Monivea got in for another couple of scores and it took some great defence from the Creggs lads towards the end to keep out the Monivea attacks with Conor McNulty, Luke Divilly and Tiernan O Sullivan doing very well.