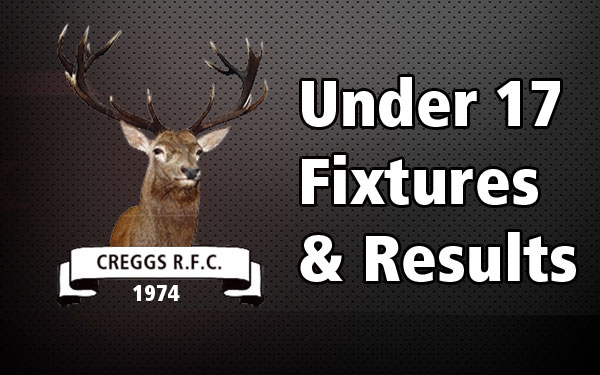 An under strength Creggs Under-17 team took on local neignbours Buccaneers RFC in Creggs last Sunday morning in the Connacht Under-17A League.
Played in atrocious conditions, both teams can take great credit for this being a highly entertaining fixture with very few mistakes or dropped ball considering the underfoot conditions.
It was Creggs who got on the scoreboard first when they intercepted a Buccaneers pass in their own half and rached in to score for a 5-0 lead through Jack Deegan.
Buccaneers playing with the wind had most of the ball in the remainder of the first half but some heroic tackling and work on the ground early on by Tiernan o’Sullivan, Jack Tucker, Ciaran Corcoran, Adam Donnelly and Lorcan Maher upfront.
They were supported out the backs by Darren Gately at 10 and Cian Glennon and Mark Purcell as centres, constantly putting their opponents on the ground.
Buccaneers did get in for a try just on the stroke of half time after a penalty 5 metres out which they converted to take a 7-5 half time lead
The second half early pressure was put on by Creggs and a brilliant run by Ben Finnerty was halted just short of the line. However, the clearing kick from Buccaneers found Jack Deegan in space. When he was hauled down Creggs moved the ball wide and Aaron Lyons took the ball at pace and beat the defenders to score, which Mark Purcell converted for a 12-7 lead for Creggs.
With limited options up front on the bench Creggs forwards were tiring and falling off a few tackles and the Buccaneers forwards were beginning to make yardage and Buccaneers did get in for an equalising try with 12 minutes left.
Both sides had great chances after that and only some great last ditch tackles and turn overs by both sides kept their opponents out and kept the scores level and for Creggs Naoise Coyle, Conor McNulty and Daniel Hill were strong right up to the end in their defending.
This was a trojan performance by the Creggs lads in poor conditions – it ranks right up there among the best youth rugby defensive efforts seen at the Green, especially with a number of players unavailable for the home side on the day.
Hopefully, the lads will be in a position to pick from a full squad next Sunday, away to Sligo. A win this weekend plus again a week later at home to Corinthians would leave this good Creggs team on target for a Connacht League semi-final place.
Creggs Rugby: Jack Deegan, Daniel O’Brien, Ciaran Purcell, Naoise Coyle, Aaron Lyons, Cian Glennon, Mark Purcell, Darren Gately, Ben Finnerty, Jack Tucker, Conor McNulty, Lorcan Maher, Ronan Lambe, Ciaran Corcoran, Tiernan O Sullivan, Daniel Hill, and Adam Donnelly.