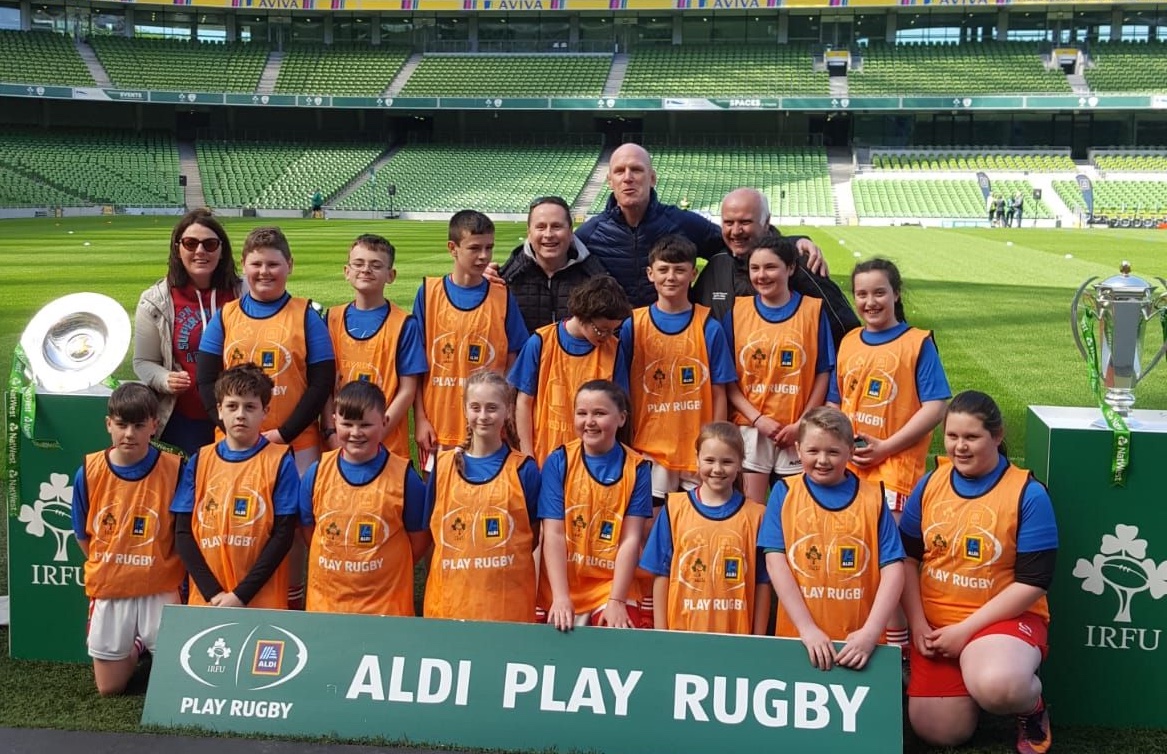 Congratulations to Cloontuskert National School, who represented Creggs Rugby in the Aldi National Tag Rugby Blitz in the Aviva Stadium last Saturday.
Well done to all the children, their coach, teachers and parents on their achievements and on a great day in Dublin at the home of Irish rugby.

A report with a difference…

My name is Sinead Connerton and I am a sixth class student in Cloontuskert N.S., near Lanesborough.

Last Wednesday, May the 16th, was a very defining moment in the sporting history of our school when we participated in the All-Ireland Tag Rugby Competition, in the Aviva Stadium in Dublin.

We played sublimely on the day, we were like Munster in our approach, sure where would we leave it? Mr O’ Gorman one of our coaches hails from the province. He has instilled in us a grittiness that gets us on the front foot in all our games.

The joy of the occasion was etched over the face of coaches, supporters, parents and players alike. Cloontuskert N.S. were not there to make up the numbers but to thrillingly win all of its matches on the biggest stage of all…. the Aviva Stadium.

Registration took place at 9:30am, so for us country folk that meant we were boarding our bus at the school at 7:25 am. So as you can imagine, well before the eyelids of the day had opened a familiar noise I have heard thousands of times before, my mam, brought my mind out of its unconsciousness and back into the real world… oh gosh, is it really 6:30am?

Departure from the school in an hour. The journey to the Aviva was like no other bus journey, minutes became hours or so it seemed. Anxious twinges in our stomachs had now replaced the morning calm.

We waited with baited breath for a glimpse of the Aviva. Eventually the stadium emerged in the distance and along with this a ruckus arose from the pit of my stomach. Others let out a huge, long disturbing roar before our principal Mr. Connerton brought a sense of calm to us all.
What was my mind set at that moment? Without hesitation I would have to say fear of the unknown. Once we disembarked the bus there was a crescendo of noise and the realisation, we are at the Aviva baby!

After registration and a quick bite to eat we quickly set our sights on the task in hand. Reality struck us all as we went through our drills and warm-up followed by a quick snack. It was our privilege to enter the Aviva Stadium as the eleventh school. We were greeted by a chorus of C’mon Cloontuskert followed by the team photo like no other. Irish, Munster and Lions legend Paul O Connell was there to greet us and embrace us and stand into our school photo.

What a legend!!! He took selfies with us, coached us on the finer points of the game and gave us all great encouragement. I have to admit all of us were either in shock, paralysed with fear or starstruck. We played three games against Scoil Barra Ballincollig, Mother of Divine Grace and St Oliver Plunketts N.S.. All of these schools were either three times bigger than ours or five times bigger than ours. But isn’t it funny how sport is a great leveller…. An even playing field I suppose. Aldi sponsored the event, provided us with food, Play Rugby t-shirts and we even got a tour of the Irish dressing rooms.

Finally, at 2pm we had said our goodbyes, Paul O’Connell had brought a close to the proceedings. He encouraged us to keep playing sport as it helps us to improve and develop mental and physical toughness alongside increasing blood circulation, reducing tiredness and promoting our physical wellbeing. It doesn’t have to be just rugby he told us, sports and games of all kinds improve our capacity to learn.

As we took one last look at the Aviva and its green dress wearing field. It was as though it gave us a grand feast upon which to feed our ravished eyes. As we bade farewell to the Aviva. We travelled for a short duration down the M4 to the comfort of the Apple Green and Burger King.
Like all good Ferraris we needed fuel and after a quick top up, two hours later we arrived back at our school. The sun shone brightly as we wearily made our way to our cars and ultimately home but that jewel green field of dreams they call the Aviva had brought a greeny magic to all of us from Cloontuskert. Paul O’Connell’s love for the game of tag rugby serenaded me on my journey home. What a day!!!