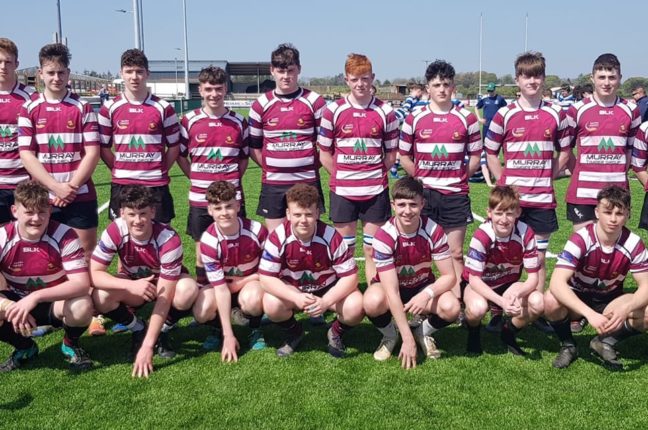 Played in glorious conditions on Bank Holiday Monday in Front of a big crowd, Creggs RFC Under-17’s qualified for the final of the Connacht Under-17 Plate with a 43 points to 22 victory over Corinthians RFC.

Creggs Under-17’s after their Semi-Final win over Corinthians RFC on Bank Holiday Monday in Creggs.

A superb attacking first half with the wind saw Creggs run in 6 first half tries. The hard work was being done upfront and some excellent work from Daniel Hill, Conor McNulty, Darragh Kiernan, and Jack Tucker early on led to quick ball and the Creggs backs moved the ball very well in the excellent conditions and tries came from Naoise Coyle, Ben Finnerty, Aaron Lyons, David Gaquin, with three conversions from Mark Purcell. Corinthians however did manage to score 3 tries of their own in the first half, to leave the half time score 33-15.

The second half was much more of an equal contest and with Creggs playing against the wind, there were some excellent defensive displays from Adam Donnelly, Ronan Lambe and Ethan Glennon up front while Mark Dowd and Darren Gately were called upon to defend much more in the second half which they did very well around the fringes and out wide Kyle Kelly, Ciaran Purcell and Daniel O Brien were never found wanting.