Expertise and tradition at the heart of Creggs’ vibrancy

Many indicators of activity and excitement swirl around Creggs Rugby Football Club. The sight of the towering floodlights dazzling in the night sky when one takes the turn overlooking the village is illuminating – in more ways than one.

Yet, perhaps the most telling sign of all lies at the feet of over 50 young players who gathered at The Green last Wednesday night for training – the state of the pitch. Although this has been the mildest winter and early spring in years, the ground is heavily trodden upon.

The significance of all those imprints left by a multitude of rugby boots isn’t lost on the Creggs senior team manager Nigel Glennon. “The ground is all cut up and that shows the volume of people that have been playing on it. Teams are training here six nights a week,” he said.

“The club is blossoming at underage level. Creggs is fielding 11 teams from U-8 to seniors. The crowds that are coming to training are a testament to the work that is being done. The success of Roscommon CBS has been a great help to us. There are only three players on the Creggs U-16 team who weren’t on the CBS team. David Purcell and Aidan Farrell have pushed rugby in the CBS,” explained Nigel who also assists with the training of the U-13 team.

“We are very competitive at the U-13, 14, 15 and 16 age levels. The club is in better shape at underage level than it has been in a long time. A few years ago we were looking at the possibility of amalgamating with Dunmore and Ballyhaunis at U-19 level. Now we have our own team again and we hope that will feed into the seniors,” Nigel explained.

“The club is putting in the work at underage and players are coming to Creggs from Roscommon, Tulsk, Castlerea, Ballygar, New-bridge, Four Roads and Glenamaddy, as well as Creggs. The popularity of rugby because of the success of Ireland and the provincial teams is a help but the foundations of the club are solid. The numbers have grown hugely in the last six to eight years when we had about 40 or 50 U-12s. Now we have almost 150,” he maintained.

Those players are involved in mini-rugby, which takes place on Saturday mornings for U-8s to U-12s. Mini-rugby is non-competitive and concentrates on developing the skills of the sport. The players take part in blitzes and a number of the Creggs mini-rugby players recently participated in an exhibition game at half-time in the Connacht-Glasgow match.

Enthusiasm is seeping through the pores of this fabled club. The fruits of the labour are apparent this season as the infectious enthusiasm has been harnessed to deliver success.

The U-14s (who are managed by Liam Callaghan, Ken Loughrey and George Bannon) had important cup matches last weekend at Division One level while the U-16s played Dunmore in the Division Two league final last Friday. On the same day the club hosted a tag rugby event for primary schools to cater for the next wave of players. The U-15s are at home to Corinthians in the Connacht Cup (Division One) semi-final next Sunday. All face difficult tasks to garner silverware but there is a palpable sense of expectation.

Pat O’Gorman heads an U-13 management team, which also comprises Tommy Gately, Gerry Coyle, David Purcell and Nigel Glennon. “Lads who started out playing mini-rugby when they were six are now on the U-13 team and it is a very promising team. We look at clubs who are in the All-Ireland League such as Monivea, Corinthians and Galwegians and we are looking at being comparable to them in the future,” Pat commented.

David Purcell has played an integral role in establishing a rugby team in Roscommon CBS. “It’s no coincidence that the Creggs youth teams are doing well out of the CBS. It has helped to bolster our squads with players from nontraditional rugby backgrounds. We have 250 players from mini-rugby to 19 and it’s by going to the schools that you get new players,” David noted.

“The standard of the coaching in the club is very high. The senior team have been struggling for the last couple of years but what was happening was that we lost guys after U-15. We had 16-year-olds going straight to U-19 because there weren’t any teams in between and they fell away. Now we are bridging that gap. Next year we will have an U-17 team. We are keeping those lads together and that will bring 19-year-olds into the first team,” he emphasised.

“We have been badly hit by emigration over the last couple of years but hopefully the young lads coming through over the next few years will be able to stay around. We are trying to bridge the gap from between 16 and 19 to adult.

“The underage is going well and the club has always had a good emphasis on underage through people like Derry O’D-wyer, Liam Callaghan, Adrian Leddy, Ger Dowd, John Cunningham and Anthony Duignan.

All the coaches are doing tremendous work. They are working as a unit and putting in huge work on behalf of the club,” Seán said.

Ger Dowd has long been one of the club’s most recognisable figures. He heads an U-15 management team that includes Billy Brandon, Padraic Deane, Peter Keegan, Eamon Collins and Micheal Kelly.

“The U-15s are in Division One. The standard gets higher as you progress through the age groups. Buccaneers came here to play us with 51 players, that’s the type of pick they have. We played six games in the league, we won two and lost four but we were competitive in all our games. We beat Connemara 18-0 and Ballina 24-5. We played well that day and we were pleased with that,” Ger explained.

“Now we are in the semi-final of the cup against Corinthians. It’s a tough ask but we are at home and we’ve had good support at all our games. As you move up the levels it gets tougher to have good teams in a rural area where lads are going away to college. This is the first year in many years we’ve had an U-19 team and we hope that will feed into the senior team,” he commented.

“The uniqueness of Creggs is that it brings lads together from different areas. We have lads here from Roscommon, Ath-league, Four Roads, Castlerea who play against each other in GAA. Glenamaddy play their football in Galway but they come here to play rugby. All these lads from different GAA clubs are having fun in a unique setting.

“In the times that are in it, obesity is a huge problem. Despite the changes in the sport, there is a place in rugby for lads of all shapes and sizes. Rugby has a role in catering for lads who are uncomfortable playing football or soccer. It accommodates their abilities and you see lads’ self-esteem improving enormously,” Ger said.

Creggs has carved out a special niche for itself in rugby folklore since its formation in 1974. As the training session continues under the floodlights, the vitality of youth crackles in the air but, importantly, that vibrancy is buttressed by the twin pillars of expertise and tradition. It is a mix that holds out the promise of a bright future.

The Special Offer to Creggs and all Connacht Clubs is a Match Ticket and Bus for €25. It should be a great night out, so spread the word and contact Sean Brandon, Club Secretary to book your place. 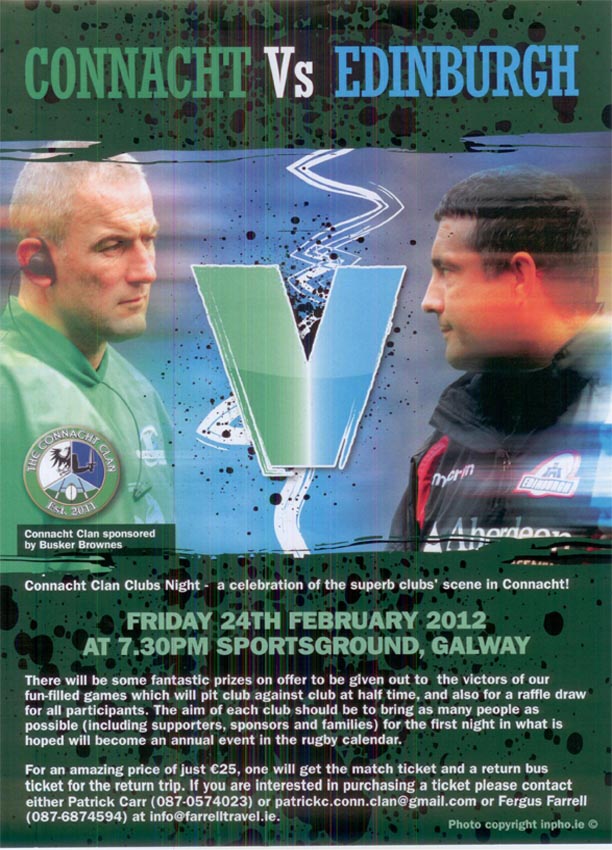 In Creggs today (Friday), CBS First YEears had a very impressive 21 – 0 win over Sligo Grammer in the Connacht First Year Colleges Development Cup. Well done to all concerned with such great performances in their first competitive year in Connacht Rugby competitions.

There was a very enjoyable charity tag rugby blitz run over the Christmas at the Green in Creggs on what turned out to be a lovely evening under the lights.

There were 16 teams that took part from hurling, football, soccer, and rugby clubs from the area. It was great to see the variety of local sports clubs playing together.

Many thanks to Athleague and Ballygar Hurling Clubs; Creggs, Fuerty and Castlerea Gaelic Football Clubs; Shiven Rovers Soccer Club and Creggs Rugby Club for your support.

Thanks also to Paul Connaughton, TD East Galway , County photos from Roscommon, the Brandon’s and Flemings from Creggs, with the Clarke’s from Castlecoote who also entered teams.

The Final was an excellent game with Shiven Rovers just losing out to Tom Flemings team from Creggs by a try in injury time.

Thanks to the referees Jack, Matty and Noel form Creggs Rugby and the two Connaught Branch Refs Tom Mc Nicholas and Emmet Dormer. I’d like to thank Bosco and Liam from the Roscommon Civil Defence – they were kept busy all evening.

When the rugby was over everyone headed to the clubhouse where Stephen Blake provided the music until the early hours and did a great job. Well done Stephen.

There was also a raffle and auction on the night. I’d like to thank everyone who donated prizes for the raffle, including KIA Motors (via Deano) who donated a signed Sean O’Brien Ireland jersey for auction. Also to Cieran Coyne for the fabulous presentation case for the jersey.

Thanks very much to everyone that helped out during the day Kenneth, Peter, Duff, Berney and Charles and on the evening to the girls in the kitchen and everyone behind the bar.

Above all, thanks to Creggs Rugby Club and Berney Higgins the president for allowing the use of there facilities and donating two home international tickets for the auction.

There was just over € 3000 raised on the night that will go to the East Galway Friends of Belarus.They are a group of volunteers that travel out to Belarus every year to carry out much needed renovations on orphanages and hospitals.

On the night, Sean Gavin, one of the volunteers told us about the state of these facilities and how primitive they are compared to our own hospitals and also how the people of Belarus were so thank-full for what had been done for them.

Thanks again for everyone’s support on the night . Happy New Year.

WebMaster Comment: “Well Done Nigel – A great night was had by all and a very worthy cause will benefit greatly. Take care of yourself when you travel to Belarus”.

Just three weeks in to the new on-line Lotto, the jackpot of €2,300 was won by a long-time supporter of the club Matt O’Brien. Tim is a brother of Creggs Rugby legend Tom O’Brien, who sold him the winning ticket.

Matt used the occasion of a family get together in Creggs over the Christmas to be presented with his winning cheque (see pictures), and a great evening was had by all concerned.

The Creggs Rugby Lotto can be played on-line or by contacting any coach or committee member. The next draw is on Sunday next, with the jackpot of €2,800. 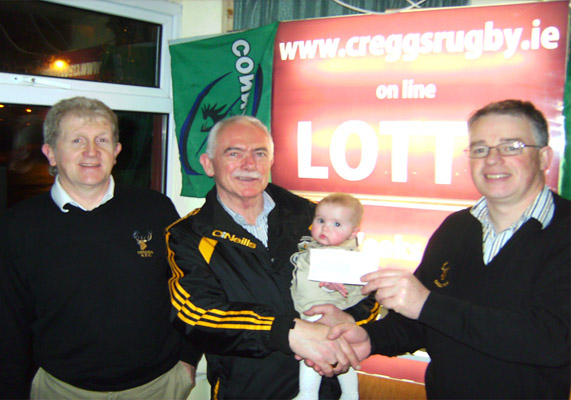 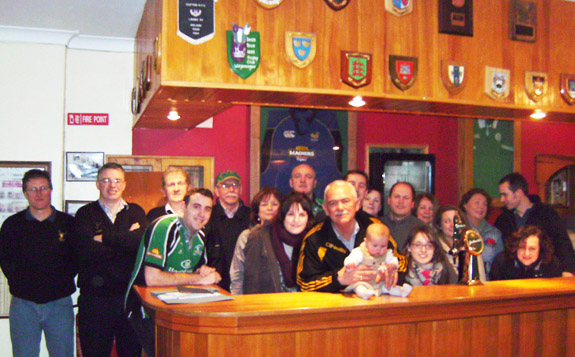 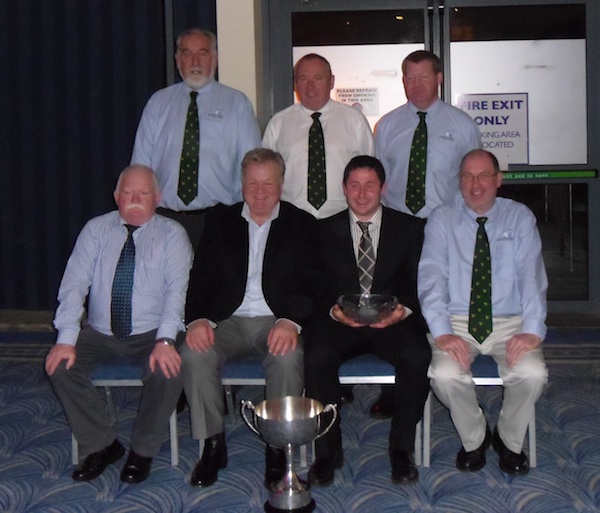 All Creggs Rugby On-Lotto sellers are requested to put in a special extra effort from now until Christmas.

The area groups in Creggs, Roscommon, Castlerea, Ballygar and Strokestown along with the Senior player groups and the those looking after the Youths and Mini Rugby teams will be contacted in the coming week by the Club Lotto management team.

All that is required is a small effort by all players (present and past), members (present and past), parents of the players currently playing and those who played underage in the past as well as all the many friends of Creggs Rugby at home and abroad. The Creggs Lotto cworks out at just €2 per week. to support your club.