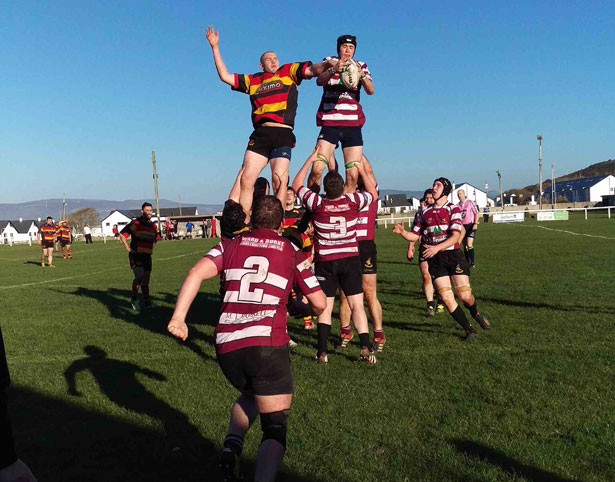 Creggs Rugby played some outstanding rugby to run in seven tries in an impressive display of attacking rugby at Strandhill on Sunday. Sligo opened strongly, and almost crossed for a try in their first attack as their forwards took the battle to Creggs.

Creggs gradually got to the tempo of the game, and a try by alert centre Barry Egan in the 7th minute settled their nerves, with outhalf Shane Dowd adding the conversion.

Dowd brought his outside backs into play at every opportunity, and one such move resulted in a superb try by flanker Matthew Brandon midway through the half, The ball was moved at speed through many pairs of hands and Brandon finished it off in style.

Shane Dowd converted, before Sligo hit back with a penalty in the 25th minute by Sean Donnelly.

With Creggs now dominant up front, fullback Scott Oates cut through for a fine try in the 36th minute, and just before halftime, winger Sean Quinn powered his way over to leave Creggs comfortably ahead by 24-3 at the break.

However, Sligo dominated the next ten minute period during which Creggs appeared to switch off, and it took a try by Sligo’s Donal Brady to jolt them back to the reality that the game was still to be won.

Creggs responded with a try by Bernard Kilcommons, which Dowd converted, following excellent work by the Creggs forwards. Shane Dowd then produced a moment of individual brilliance to seal the game for Creggs, when he glided effortlessly past several opponents to touch down for a superb solo try in the 55th minute.

Scott Oates completed the Creggs scoring with his second try of the afternoon, marking his successful return to the Creggs colours, on a day when the backs took full advantage of the perfect conditions to cut the Sligo defence to shreds.

Sligo battled to the end, and a rolling maul brought play to the Creggs line,with the referee awarding a try under the posts which Donnelly converted to give the home team some reward for their never-say-die attitude in the face of overwhelming odds.

Creggs are away to OLBC (Boys Club) nexy Sunday, and they will be hoping to build on recent impressive displays by recording another victory in Galway.