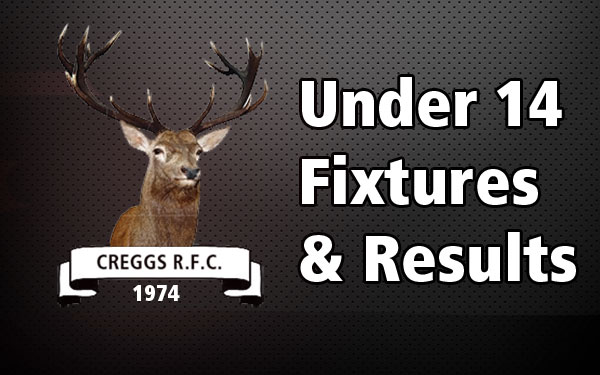 Connacht Under-14 A League:

Creggs and Galwegians clashed on Saturday morning in Creggs for a place in the Connacht Under-14 A League Final with the Creggs boys coming out on top in a low scoring encounter.

The game was doubtful right up to kick off after the heavy overnight rain and the game was played in heavy conditions which contributed to the low scoring game Both teams did try and run the ball but it was a credit to both teams that their defences were excellent on the day.

Up front the both teams had parity at scrum and lineout and Aidan Hoare, Leigh Kilcoyne and Michael McAteer did very well and defensively the Creggs back row of Ciaran Purcell, Edimar Fimho and Daniel Flynn made tackle after tackle to keep the dangerous Galwegians Back line scoreless. While out the backs Aodhan Looby, DJ Hession , Cormac Dolan and Senan Lambe defended very well in the opening period.

Creggs only score came after 13 minutes when good defensive work led to an interception by Jack Fleming who ran in to score in the corner.

In the second half with the wind Galwegians did have the better of the territory but Creggs continued to carry the ball well through Tomas Tiernan and Ben Johnson up front while Oisin O Beirne, Ryan Conlon and Shane Walsh looked threatening but good Galwegians defence snuffed out any danger.

With such a slight advantage,  for the first time in the whole game, Galwegians did threaten the Creggs line within the last 5 minutes with two good attacks from their forwards but the Creggs defence stood firm and held them out with some great defending.

Connacht Under-14 A League Final