Creggs kick off Connacht League with good away win

Creggs Firsts travelled to Tuam last Sunday for their first Connacht League game of the season. Always a tough place to go to win, but that’s what the Creggs men did, with a 14 points margin.
The poor promised weather didn’t materialise so the conditions were good. There was a strong wind blowing and it was at the back of the Creggs men for the first half. Two good converted tries in the first 20 minutes and after some sustained Tuam pressure, Creggs again broke out for another before half-time, giving the Village a 21-0 half-time lead.
Tuam came out playing with the strong win and they were meant business from the start. However, good defence from Creggs frustrated their efforts for most of the second-half and it was the visitors that could have score three more tries at the other end, but the final passes didn’t work out and Tuam defended resolutely.
Following one of those visits to the Tuam red-zone, they broke out and got over the creggs line. The try was converted. Both sides had chances in the last 10 minutes but the game finished 21-7 to Creggs.
Creggs Rugby: Eoghan Cahill, Sean Og Higgins, Aidan Leech, Tom Farrell, Brian Donoghue,
Conor Rohan, Ciaran Corcoran, Brian Diffley (Capt.), Mark Brandon, Shane Purcell, Chris Duignan, Tom Callaghan, Pete Lohan, Michael Holland, Mark Purcell, Tom Fleming, Ray Cassidy, Ronan Cahill, Brian Cleary, Michael Farrell.

Big upcoming First Team Games
There is a well earned rest from competitive fixtures next weekend, and the weekend after, Creggs travel to Connemara for Round 2 of the Connacht League.
On Saturday, the 23rd., Creggs have been drawn to play top Munster side Kilfeacle in the All Ireland Junior Cup, in Creggs.
It was also confirmed that after four wins from four in the Cawley Cup, Creggs First’s have earned a home semi-final v Connemara (again) on the weekend of the 6-7 of November.

Creggs Development Team
The Creggs Development squad will get their season under-way in a couple of weeks with the commencement of the Connacht J1C League. New and returning players (including Under-20s) always very welcome in Creggs for training on Tuesday and Friday nights.

ADULT RUGBY TRAINING
Training continues for all First’s, Development and Under-20 players each week on Tuesdays at 8pm and Fridays at 8.15pm. New and returning players are always welcome in Creggs.

Creggs Under-16 Girls play Ballina RFC in Creggs next Saturday at 4.30pm in the Connacht League.

Creggs Under-13 Boys will travel to Ballina RFC next Saturday in the Connacht League. Time TBC.

Creggs Under-15 Boys will play Corinthians RFC next Saturday at 2.30pm in Creggs in their Connacht League game.

Creggs Under-17’s are due to play in the Connacht Under-17’s League on next Sunday, away to Claremorris, Time TBC.

Creggs Under-18.5’s are due to play Corinthians RFC in the Connacht Under-18.5’s League next Sunday, in Creggs at 12 Noon.

GIRLS Rugby:
New Players always welcome to come along to Creggs and give it a try.

Creggs Under-16 / Under-18 Girls training on this Wednesday evening at 7pm.

BOYS Rugby:
Creggs Under-13 Boys train next Wednesday at 7.30m.

Creggs Under-14 Boys train next Wednesday from 7 to 8.15pm in Creggs.

Creggs Under-15 Boys training continues on Thursday at 7pm.

Creggs Under-14 Girls have a great first outing 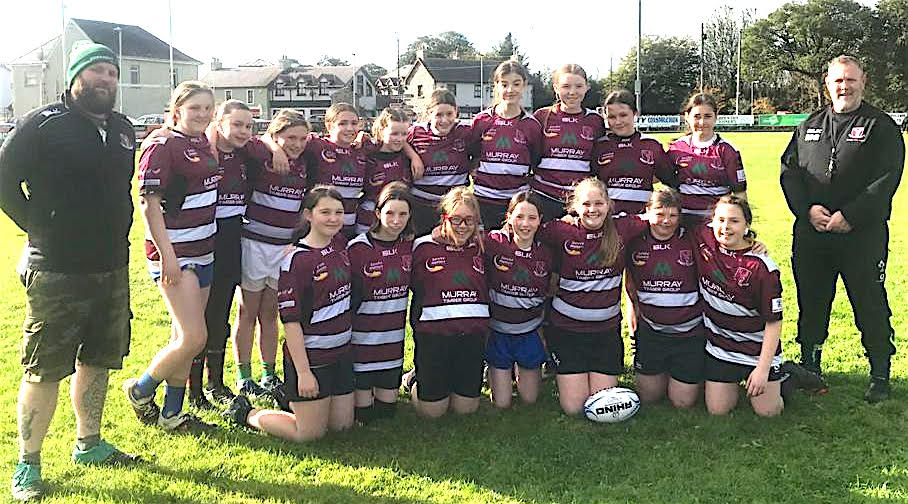 The Creggs Under-14 Girls Team who played their first game last Sunday in Creggs V Claremorris RFC. New players always welcome to come along to Creggs and give it a try on Monday evenings at 7pm.

Creggs Under-14 boys played Corinthians Blue team at home last Sunday. The home team were trying to win their third game in a row but just came up short with a 14 points to 7 defeat.

Creggs had the advantage of a strong wind at their back for the first half. The Corinthians team showed intent to be aggressive in the ruck and were not willing to take a back step. Creggs defended valiantly but could not get into the same groove as in the previous two games where they protected the ball well around the ruck. The travelling team looked on a few occasions that they were ready to open the scoring but ball not going to hand kept the score sheet blank. After about fifteen mins the pressure finally payed dividends when the big Corinthians number eight crossed the line just to the right of the posts, and it was converted.

Creggs fought back and Kaylum Curren gave a cross field kick for Jack Finn to run on too and he touch down for a try. Kaylum slotted it over to level the score. That’s the was it stayed until half time.

The second half continued like the first, Corinthians were winning the loose ball on the ground and managing to spoil the lineouts. Despite all the possession Corinthians were unable to add to the score board. This gave Creggs a small bit of confidence and it showed in their scrum which was solid enough. The game was well in the last quarter when ending a good passage of play, the Corinthians number 8 got over for his second try. It was converted to edge the visitors ahead again.

The home team made a few changes along the way and managed to get 25 players game time. With fresh legs on Creggs moved the ball out the backs but the Corinthians backs defended well. There was a small glimmer of hope when Cian Trimble went on a run and got over the line but the ref ruled that there was a second movement to get him over the line. At this point Creggs seemed to run out of ideas of how to break down a very solid Corinthians defence. This was a good tough test for the Creggs boys who have two weeks break before their next round.

Creggs Under-18.5 Squad who came up short to Galwegians TFC in Creggs last Sunday.

Beginners and all Boys and Girls new to Mini-Rugby at all age levels are always very welcome in Creggs.