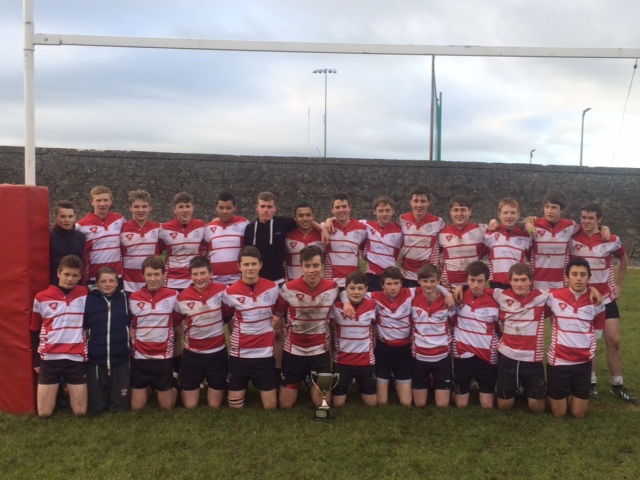 CBS Roscommon have qualified for the semi final of the Top Oil Junior Schools Cup after a 22 points to 0 win over Marist College in Creggs last Thursday afternoon.

CBS have now secured a home semi final against most likely opponents St Josephs the Bish from Galway in Creggs on Tuesday the 10th of March.

Played in difficult conditions both teams tried to make the game as expansive as possible and it was CBS who had the better overall 15 man game to take the spoils on the day. CBS began the game playing against the wind and used their forwards especially Daire Byrne, Rian Biesty, Patrick Fannon , Ian Conlon and Killian Higgins who were prominent early on carrying ball. Once secured Shane Purcell and Eoghan Coyle moved the back line well and Tim Lambe was also doing well at 15 when the ball was kicked to him.

CBS opened the scoring on 14 minutes when good work up front by James Brandon, Melvin Conteh and Ian Conlon produced good ball for the backs and when they moved it wide and Jason Hoare fed Niall Cunniffe who ran in unopposed to score to give CBS a 5-0 Lead. Marist College had a chance on 22 minutes to reduce the deficit but Michael Hanley’s kick hit the upright and was cleared by the CBS cover. Just on the stroke of half time CBS increased their lead to 10-0 when from a scrum on halfway, James Brandon picked from the base, fed Eoghan Coyle, who offloaded to Cian Gately and when Gately was tackled Dara Byrne was first to the breakdown and went on the blindside to touch down in the corner.

In the second half CBS continued to have territorial advantage early on but heavy hail showers were now making conditions difficult for both sides and handling errors were prominent early in the half. CBS stretched their lead after sustained pressure after 18 minutes of the half, Marist College gave away a couple of penalties 5 metres out and Eoghan Coyle dived in from close range to extent the lead to 15-0.

The game was now out of Marist College reach and CBS continued to attack and after 22 minutes of the second half more pressure was converted when Melvin Conteh touched down which was converted by Shane Purcell for a scoreline of 22-0.

CBS will now more than likely play pre tournament cup favourites The Bish in the semi final. Both teams met prior to Christmas in the Junior premier League final and CBS came out on top on that day 35 points to 19. The Bish will be lying in wait I am sure, looking to gain revenge on the CBS boys.