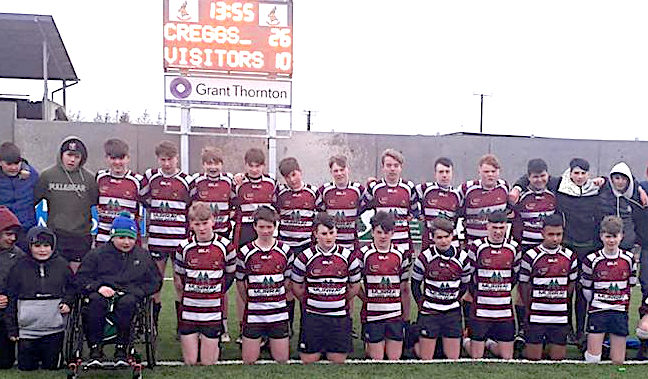 Creggs Under-15 players made history last weekend when two teams were fielded in the Connacht Under-15 Cup. And the players put in two heroic performances to win both Cup games.

First up on Saturday last on the 4G Pitch in Creggs was NUIG against Creggs ‘Maroon’ team. The first half saw two NUIG tries, despite sterling defensive work from Oisin Nolan, Michael Connolly & Andriu Oates.

Creggs settled down and the home team’s full back Shane MacDermot was unlucky not to have scored. He ran 40 metres after collecting an NUIG kick. He got by four NUIG defenders to be finally held up on their try line.

Then in the final minutes of the first half, after a fine break by Sean Brandon, Andy Quinn touched down and struck the conversion, to leave the score 10-7 at the break.

Captain Jack Donnelly rallied his players in the huddle at the break with inspirational words that encouraged the lads to fight back from being down by 3 points.

From the half time kick-off Sean kelly received the ball and off-loaded to Cormac Petri, who ran 70 yards before he released Emmet Sweeney to touched down. Andy Quinn converted, making it 14-10.

As the game went on, some fine tackling from Cyril Bokie on the wing kept NUIG out on a couple of occasions and for the rest of the game, the Creggs boys were on top.

The energetic Creggs number 8, Adam Flynn, put in a man of the match performance, with his strong running and off loading game and his tackle count of 22 tackles made.

Late in the second half Creggs out half Jamie Betts got a fantastic pass away to the Creggs centre’s releasing the strong running Conor Kelly, who’s pass resulted in a try by Cormac Petri.
With the conversion, that was the final score of 21-10 to the home side.

The next Cup fixture is away to Castlebar is the next tricky hurdle for this Creggs Under-15 ‘Maroon’ squad.