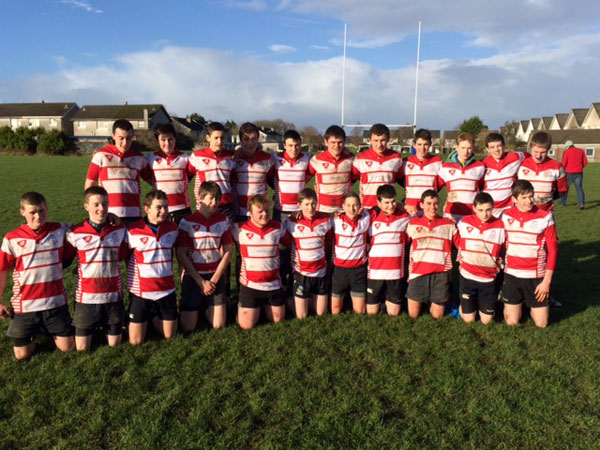 In their first game in the premier Cup Competition at Junior level CBS Roscommon had a very impressive win over fancied The Bish by 13-0 in Newcastle, Galway last Wednesday lunchtime.

Having competed at Junior Development Cup for the last two seasons and having lost to The Bish by a late try in the semi final of the league earlier in the season, CBS knew what to expect and were not disappointed in this very well contested encounter.

CBS Started the game well and had the better of territory in the first half when playing with the breeze and took the lead through a Michael Farrell penalty after 10 minutes. CBS continued to use the wind for territory and put pressure on the St Josephs lineouts and scrums to keep their opponents in their own 22”. After a period of sustained pressure after 20 minutes Eoghan Coyle picked and dived over from close in which was converted by Michael Farrell to give CBS a 10-0 lead. 5 Minutes before half time CBS were unlucky not to add to their tally when they ran a quick penalty from half way and put the ball through the hands to Niall Cunniffe who ran into the 22” and was unlucky to see his kick just go dead before he could reach it. That left the half time score 10-0.

Up front for CBS Daire Byrne, Sean Doorly, John Murray, James Fetherstone, and Brian Diffley were carrying well and defending around the fringes and from the set piece James Brandon and Michael Feeley were ensuring a steady supply of ball. At out half Shane Purcell constantly had the opposition on their toes by varying the play and out further the centre partnership of Jason Hoare and Conor Shanagher never gave their opponents time in attack.
With the elements in the second half the Bish were always going to put CBS under pressure however it was CBS who scored first and after a failed penalty attempt after 4 minutes, Michael Farrell stepped forward after 6 minutes to convert a penalty to give the CBS a 13-0 lead.

The Bish took complete control of territory for the remaining 20 minutes and it took courageous and heroic defence from all the CBS players to keep them at bay. CBS Roscommon will play Clifden CS in Round 2 of the Cup next week.