As the league hits the half way mark this bonus point win, their fourth such in four games, moves Creggs to the top of the table with a five point margin over second placed Tuam.

Played in harsh but mainly dry conditions Creggs drew first blood when full back Dave Flahive touched down in the left corner after seven minutes. The build up to the score saw good forwards and backs interplay with Flahive on the receiving end of a beautifully floated pass from out-half Shane Dowd. The lead was short-lived however, Ballyhaunis capitalising on Creggs failure to deal with a high kick as Ryan Convey pounced before adding the conversion himself to leave the visitors 7-5 ahead. Creggs responded quickly, a deftly reversed attack putting right winger Stephen Crehan in for a try under the posts at twenty five minutes. Dowd miscued the conversion but made amends ten minutes later posting home a more difficult kick after hooker Sean Og Higgins had added a third Creggs try. From the ensuing kick-off Creggs attacked again affording Dowd a penalty attempt which he duly converted to leave his side 20-7 ahead. The bonus point was achieved just before half time when Tom Oates brilliantly stole a Ballyhaunis throw on his own 22, Creggs broke quickly out of defence and with the opposition in total disarray Creggs were awarded a penalty try which Dowd converted to leave his side 27-7 ahead at the interval. Creggs were less impressive in the second half, performing fitfully and a number of scoring changes went abegging due to handling errors and misdirected last passes. Ballyhaunis capitalised on this with scrum half Gabriel Gallagher diving over from a five metre scrum and Convey’s conversion brought his side to within two scores as the game entered its final quarter. That was as close as they got however, Creggs pulled away with two further Dowd penalties and Kevin Gavin, making his senior debut as replacement full-back, scored his side’s fifth try following a defence splitting diagonal run by Dowd who added the conversion to complete the scoring. Overall this was an impressive showing by Creggs, the back-line gelling well with half-backs Dowd and Andrew Callaghan again superb, Tom Oates lording the line-outs, Aidan Leech prominent in the loose with old hands Tom Fleming and Kevin Brandon to the forefront of a pack which left the visitors living off scraps throughout. Creggs have two home games before the Christmas break, the first against third placed Castlebar at the Green this Saturday, K. O. time to be confirmed. 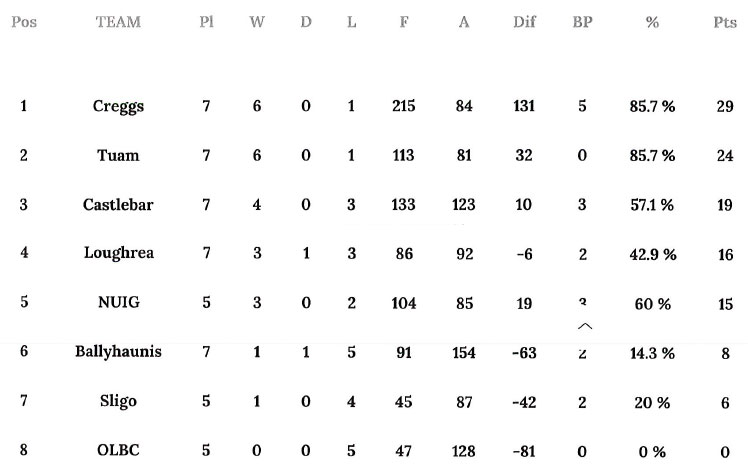