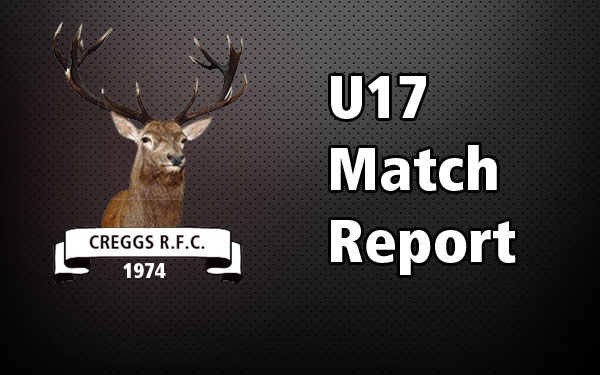 Creggs U17 team moved into third position in the league with an emphatic win over local rivals Buccaneers last Friday night, under lights in Creggs. This was a very exciting end to end affair with Buccaneers opening brightly with out-half Luke Carty chipping the ball over the Creggs backline and full back Conor Murray diving on the ball to make the touchdown for a great try, which they converted. Creggs knew they were in a match and responded quickly with a well worked try involving good forward play by Alex Syrek, Simon Spain and James Regan releasing centres Kevin Gavin and Colm Fallon for the latter to score. Shane Dowd missed the connect but made amends five minutes later with a half-break leaving the Bucaneers defence wrong rooted and scoring under the posts for a try he then converted.

Bucaneers however replied before half-time with a lovely interplay of passes near the touchline for a try themselves, leaving the visitors leading at half-time by 12 points to 10. Creggs needed to rally in the second half and they did, led by the superb Brian Diffley at number 8, well supported by second rows Michael Kelly and James Regan. Creggs managed to slow up Bucaneers possession at the ruck with Rory O’Donoghue, Thomas O’Byrne and Alex Syrek prominent. At scum-half Michael Farrell did well and rounded off his performance with a great individual try, controlling the ball with his feet before scoring at the corner flag. Kevin Gavin, who worked tirelessly all night, converted from the touchline. Shane Dowd added a penalty and Brian Diffley crashed over for another try.

Shane Dowd’s convert came back off the post. Then, the best score of the night involved some great work by the forwards, involving Luke Kelly, Dan Butt, Aidan Devine, Brian Coady and Conor McNeill, saw Conor Gore put into space by Robbie Daly and Kevin Gavin. He then fed the ball to the supporting Donal Kelly and the full back, who was solid and secure all night, made the line for a great try. With a few minutes to go, centre Colm Fallon, who was outstanding throughout, made a half-break supported by Christy Leahy and Conor Gore who fed Shane Dowd and the out-half beat the cover to score in the corner.

Training continues next Wednesday at 7p.m.