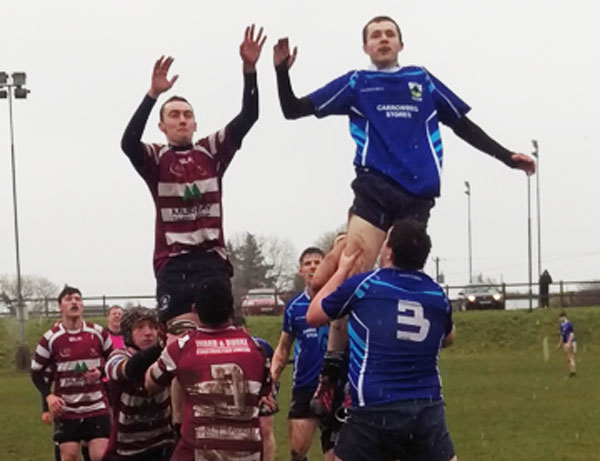 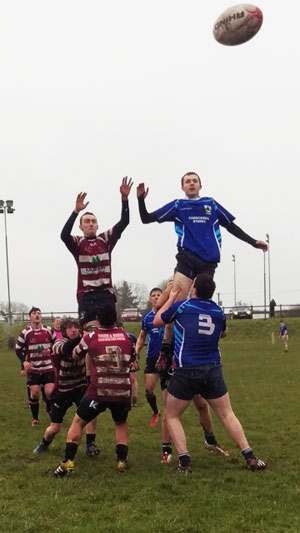 Creggs U18’s won a hard fought battle on Sunday morning last to progress to the Connacht Cup quarter final. Played in Castlebar owing to neither club having a playable pitch this match was all about who could handle the conditions better. The heavy pitch and the dreadful weather, mixed sleet and heavy rain meant that this match was not for the faint hearted.

To both teams credit, the rugby on display was of the highest standard and the early encounters were evenly matched. Creggs brought a big but skilful pack and ultimately that proved to be the difference. Seven minutes in Sean Doorly gained a turnover for Creggs on the Westport 10 metre line and a series or quick passes saw centre Rian Biesty break two tackles to score the first try in the corner. Creggs continued in the ascendancy and captain Michael Farrell from scrum half with Shane Purcell at out-half looked very comfortable in the dreadful conditions. Number eight and go to Creggs player Ronan Cahill was getting over the gain line repeatedly but as Creggs looked to increase their lead they knocked the ball on and the Westport scrum half gathered and covered the length of the pitch to score a converted try under the post to take the lead.

Creggs responded almost immediately and the pace of winger Creggs Daire Byrne belied the heavy underfoot conditions as he outpaced the opposition defence for a fantastic score. Westport were now struggling and a wayward pass was intercepted by Purcell for try number three converted by Farrell. A fourth try followed when wing forward Edward Clinton broke from a ruck and with support outside executed a classic dummy pass and the gap opened beautifully for him to coast in, a just reward for one of Creggs most consistent players at this level. The conversion was added leaving Creggs leading 24-7 at half time.

Westport knew that they needed to score first in the second half and they started very strongly but resolute defence from Creggs and in particular Danny Arnold, Domhnall Forrest and Callum Golding meant there was no way back for Westport. The solid Creggs scrum with props Melvin Conteh and Dan Butt facing bigger opponents but their doggedness saw them in the ascendancy. Michael Feeley was excellent in the lineout and on fifty two minutes Ronan Cahill barged in for another Creggs try. It was now very difficulty for Westport as the sleet pelted down and another turnover for Creggs saw Liam Lapina link well with Adam Finnerty who put Bryne in for his second try and the game, as a contest was over. Deservingly Westport scored two late tries but it is the Creggs lads who have progressed to the Connacht Cup quarter final winning 36-17.