Creggs under 16’s pulled off a shock win away from home last Saturday morning against a previously unbeaten and much fancied Galway City team in the Connacht A League.

An early kick off to facilitate the Creggs lads going on to watch Connacht in their European Champions clash with Zebre might not have seemed a great idea as Creggs started very lethargically and were second best in all areas during the early exchanges. Wegians dominance was rewarded when their back line easily outpaced their Creggs counterparts to score in the corner. From the restart Galwegians failed to secure the ball Roddie McGuinness gathered and set up the ruck for Creggs and three phases later Creggs Captain and scrum half Aodha Hession went over from a meter out, Mark Purcell added the conversion and the visitors had an unlikely 2 point lead.

The promised rain held off and with both teams looking to move the ball wide the game was opening up. The Creggs set piece, scrum and line out were functioning the better of the two teams but Galwegians were making fewer mistakes and winning more ball at the breakdown. On 22minutes the home team took the lead when their forwards patiently worked a fine score under the post for seven points and a half time lead of 12-7. 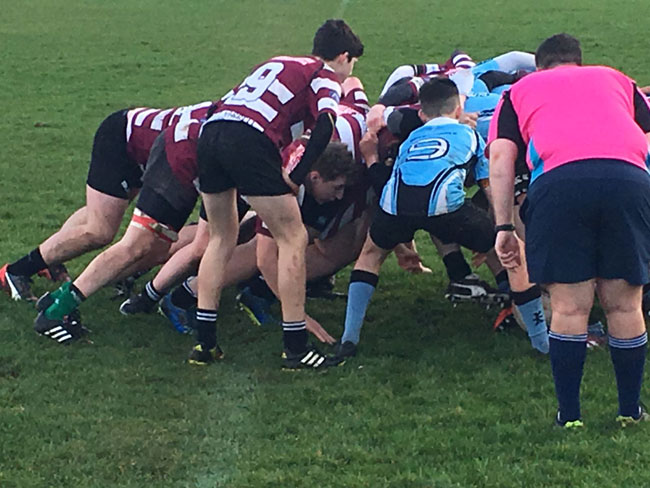 Creggs started the second half strongly but were failing to find the decisive pass to penetrate the Galwegians defence, however when Wegians were penalised for holding on in the tackle, Mark Purcell stroked over a difficult penalty to narrow the gap. With both defensive lines taking liberties with the offside rule the referee decided to punish Creggs in the 52 minute in front of their posts and the Galway team happily collected the three points on offer and with only eight minutes remaining this should have been the decisive score. Creggs with one eye on the upcoming Connacht Cup had all their substitutes on and it was difficult to see how they could turn this around. However the Creggs team dug deep with some strong drives from their big forwards and with Thomas O Brien to the fore Creggs were consistently getting over the gain line, with only two minutes remaining Sam Sullivan took off from his own ten meter line, evaded several defenders before off loading to Jack Tucker who passed inside to Purcell who was brought to ground just 10 meters short. Creggs recycled through two more phases and then O Brien powered over for the try to level the match. This left Mark Purcell with a difficult conversion attempt which he made look easy with an excellent strike giving him a 100% kicking success rate on the day and ultimately Creggs the win as they saw out the last minute for a rare away win against one of the established old guard of club rugby. The Creggs team travelled on to the Sportsgrounds to see Connacht’s very comfortable win over Zebre in the Champions Cup for a memorable day out for the Village under 16 team.