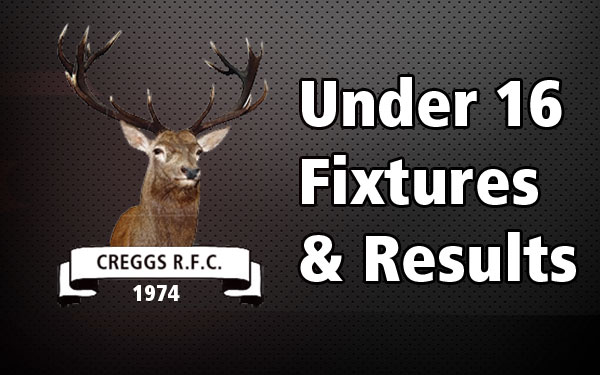 Creggs Under-16’s took on Galwegians on Friday night under lights in Creggs in the Connacht Under-16 A League and lost out on a scoreline of 34-17. Creggs were minus five of their usual starting line up for various reasons but the lads who came in acquitted themselves very well in the first half of this very physical encounter.
Creggs found themselves down early on when Galwegians ran in for a very soft try under the posts which they converted for a 7-0 lead but Creggs clawed their way back into the game and after 15 minutes found themselves in front after a try by Lorcan Maher and a penalty and conversion Mark Purcell.
Galwegians responded well and managed to get in for 12 unanswered points after 2 tries, one of which they converted to lead 19-10 after 20 minutes but Creggs continued to attack and a move from the back of the scrum late in the first half Purcell fed Andrew Naughton out wide who had a lot of work to do but still managed to score right in the corner and Mark Purcell converted from right on the touchline to leave just two points between the teams at half time 19-17.
In the first half Darragh Kiernan, Ehtan Glennon, Adam Donnelly, and Luke Divillly were very effective with ball in hand and out wide Cian Glennon, Aaron Lyons, Shane Connaughton were excellent in both attack and defence,
The bigger Galwegians Squad paid dividend in the second half and as the Creggs lads ran out of steam on the heavy pitch later on, Galwegians ran in for 3 more unconverted tries to leave the final score 34-17. Ruarai O Brien, Anthony O Gorman were excellent on their introduction while Ronan Lambe and Jack Tucker were excellent from set pieces and in open play.