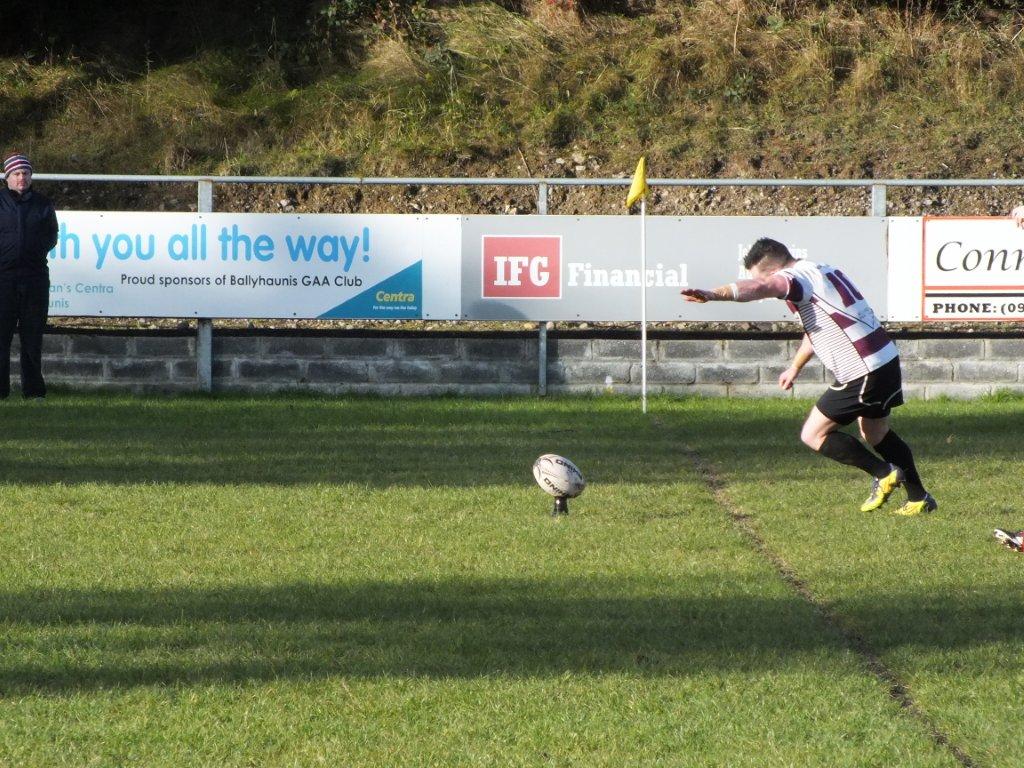 Nothing in the opening period suggested the second-half horror show that was to follow for Creggs. Perhaps in hindsight the ease with which the home side scored their opening try had ominous undertones but turning around one point to the good Creggs had grounds for optimism at half-time.

Played in perfect conditions Creggs were first on the scoreboard, Mark Brandon slotting over a penalty after two minutes. The visitors lead was short-lived however as four minutes later the impressive Ballyhaunis no. 8 picked up from a scum well outside the danger zone but the Creggs defence went missing in action as he sauntered over for a try converted by Gerry Patterson.

Seven minutes later Creggs lead was restored, Ronan Kelly sending a well judged kick to the right which was caught in mid air by winger Stephen Crehan whose speed on the outside left the Ballyhaunis defence for dead. Brandon narrowly missed the conversion.

Creggs generally looked the better team before half-time, pulverising the Ballyhaunis scrum but coughed up a series of penalties which generally undid their efforts. That coupled with some critical handling errors and taking wrong options saw the game turn around on a knife edge.

Barely two minutes into the second half however Creggs conceded a try which could best be described as the rugby equivalent of a soccer own goal. From an innocuous looking set piece 40 metres out, Ballyhaunis shovelled the ball out slowly, running across the field and suddenly their full-back Patterson found himself touching down having been more or less waved through. He failed to convert his own try but sealed the deal 20 minutes later after centre Stephen Shanaghy scored his side’s third try, the Creggs defence again proving uncharacteristically porous.

The result was no longer in doubt but Creggs spurned two late penalty opportunities which could have yielded a losing bonus point in favour of impromptu running efforts which were quenched at source by a ruthless Ballyhaunis defence in which their entire back row was quite outstanding.

On a bad day at the office for Creggs two forwards, Peter Heavey and Peter Lohan stood out, otherwise this is one best forgotten.

Next up is Corrib on Saturday week, postponed from Sunday next and this game now becomes a must win for Creggs.