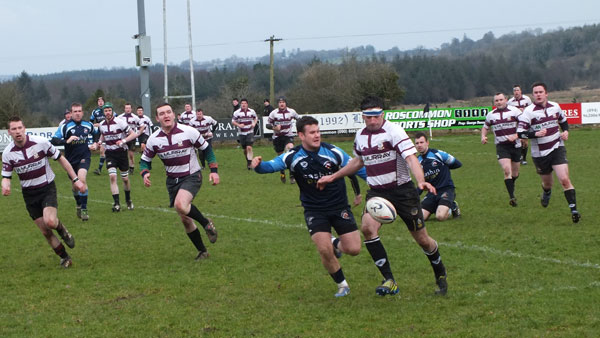 During a brief window either side of half time Creggs clawed back Galwegians early lead to leave them just 7 points adrift as the game entered its final quarter. Ominously however Wegians pulled away again as their out-half Gavin Tynan waltzed over for a soft try and his team added three further tries before the final whistle to run out easy winners. Right winger Paul Power bagged three tries in the first half as Wegians amassed an early 24-3 lead, a penalty from scrum-half Ronan Kelly his side’s only reply in the opening half hour. The game already looked over at that point, Creggs having already lost their two props Peter Corcoran and Larry Mannion to injury. With Paul McNeill and Enda Garvey entering the fray, the re-shaped Creggs pack fought hard to get a foothold in the game and with scrum-half Ronan Kelly putting in an impressive shift the visitors defence was finally breached when second row Bernard Kilcommons finished a move initiated by Kelly with good support from winger Padraig Gavin and crossed under the posts for a try which Kelly converted. Creggs began the second half in similar fashion and despite Kevin Brandon hobbling off after 10 minutes, second row Tom Fleming moved back to no. 8 and with his back row colleagues Peter Lohan and Kieran Ryan launched a series of attacks on the visitors line which ultimately yielded a second try when out-half Sean Quinn crossed under the posts, Kelly again converting. That was however as good as it got for Creggs and the sleek Wegians backline ran them ragged in the closing stages, Creggs injury problems mounting as Kelly also left the field in the closing minutes. This Saturday Creggs play Monivea at The Green (KO 7 pm) and this has now become a must win for a team already bedevilled with injuries going into only their third league game.