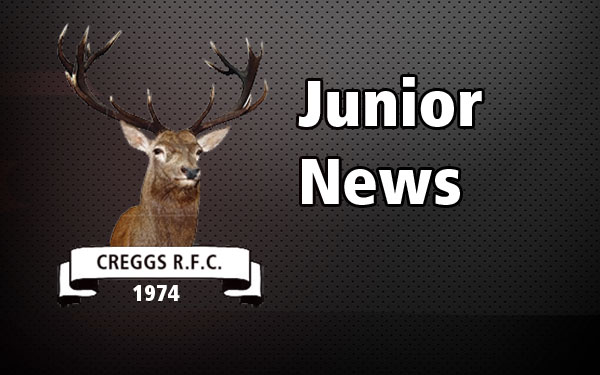 Ballyhaunis travelled to The Green on Saturday evening and came away with a hard-earned victory over Creggs Development team following a tight game more notable for strong defensive play than attacking prowess.
The big Ballyhaunis pack dominated possession in the opening quarter and a try by scrumhalf Gabriel Gallagher in the 22nd minute was a reward for strong scrummaging close to the Creggs line.
Gradually Creggs began to exert more influence on proceedings but scoring opportunities were in short supply as Ballyhaunis were vigilant in defence and the home side struggled to generate much momentum from their backline.
A penalty by Gallagher midway through the secondhalf gave Ballyhaunis an important 8 nil lead which meant that Creggs needed to score at least twice for victory.
This was a tough ask but when Noel Gately ghosted through for a fine solo try in the 69th minute Creggs were right back in the game.
Michael Farrell’s magnificent touchline conversion reduced the deficit to a single point but Ballyhaunis regained control in the closing stages to close out the match in determined fashion.
Creggs can take a lot of encouragement from this game with a tremendous defensive effort shown against the powerful Ballyhaunis team.
Peter Lohan at No.8 was Creggs outstanding player, leading by example with some thundering tackles in an all-action display.

Creggs remain well placed (level at the top with Ballina which has a game in hand) in the Connacht J1C League and now have a break from competitive action before travelling to Oughterard for the next League game on December 3rd.

Training continues on Tuesdays at 8pm and Fridays at 8.15pm. Any players that haven’t paid their membership, should do so within the next week.