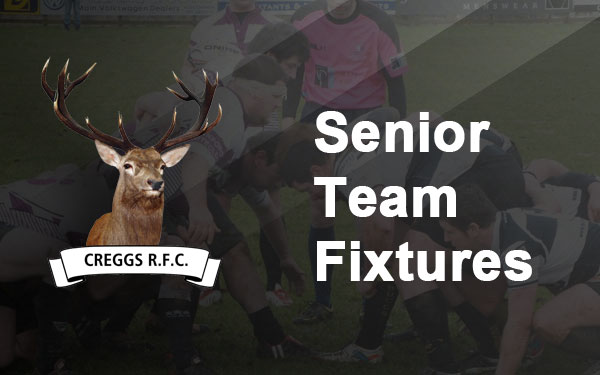 Creggs First team had a good win over Castlebar RFC in the Connacht League at the Green on Sunday last. The winning bonus point means that Creggs top the league in addition to already having secured a home League semi-final in two weeks time. 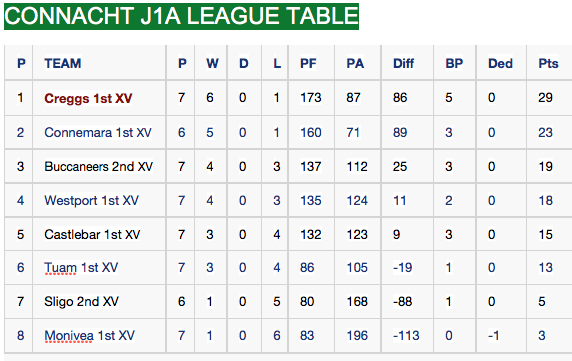 The weather was poor with strong cross-field winds and rain for much of the game, but the 4G pitch’s guaranteed good underfoot conditions, and both teams competed strongly and evenly and at half-time all the separated the teams was a very good Ronan Cahill try in the corner mid-way through the first-half.

After the break, the game came alive, highlighted by greater pace and accuracy from the Creggs men. Brian Donohue was outstanding when finishing a great team try.

This was followed by another excellent try finished by the ever threatening centre Eoghan Coyle, with the conversion from Mark Purcell, leaving it 17-0 to the home side.

However, Castlebar were not giving up and in a well worked try they touched down for a try of their own near the posts, which was also converted. That took it to 17-7.

Creggs went on the attack again from the kick-off and the pressure told when an excellent drive by Tom Fleming got him over the line for the fourth and bonus point try.

A few minutes later Ciaran Corcoran carried strong from outside the Castlebar 22 into the 5 metre line and after the next phase Ciaran was there again to charge over for another really good try.

With the game effectively won at that stage Creggs suffered a lapse in concentration that allowed the never-say-die Castlebar players score another try.

Creggs got back on track after the restart and Aodha Hession finish off very well another great move for the sixth and final try. The final result was Creggs 36, Castlebar 12, and very satisfying performance, particularly in the second-half with six tries and a winning bonus-point. Good to see many players also in very good form with lots of competitive knock-out rugby coming in the next few weeks.

Creggs will now play Westport RFC in the Connacht League Semi-Final on Sunday week (Feb. 13) in Creggs. Training continues on Tuesday and Thursday this week.