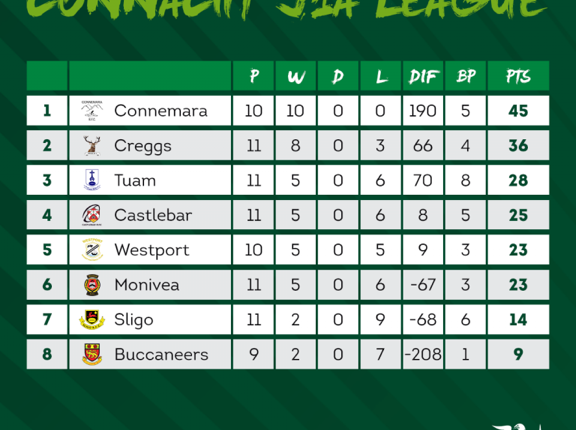 A rejuvenated Monivea team defeated Creggs in Sunday’s Junior 1A League game at Castle Grounds, Monivea after surviving a ten minute onslaught in which the home team’s tryline was bombarded by their opponents. 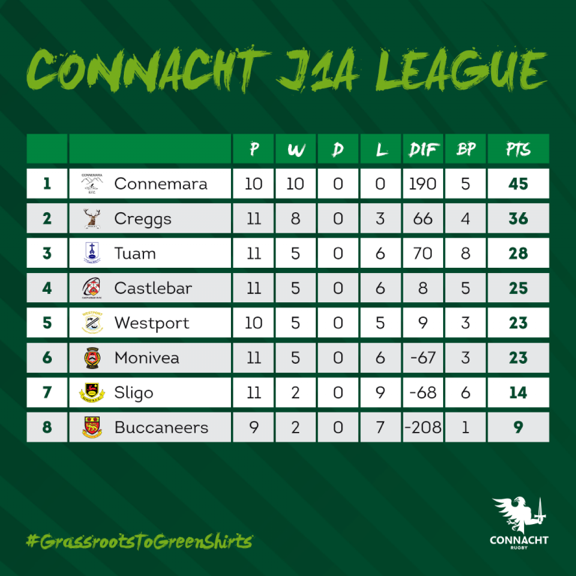 If Creggs had converted some earlier opportunities, the outcome could have been very different but on the day Monivea were much more efficient in taking their chances.

Creggs started impressively and got through for a fine try by Maurice Buckley in the 12th minute which out-half Shane Purcell converted.

Monivea’s powerful pack of forwards began to dominate up front and forced Creggs to concede two penalties which scrum-half Ger O’Connor kicked to leave his team trailing just 7-6 at the interval, with Creggs having failed to capitalise on some great moves in that first half.

A fine penalty by Purcell gave Creggs a temporary respite before Monivea swept upfield to score an excellent try with out-half Coleman Maher getting the touchdown,and O’Connor landing the difficult conversion to edge the home side ahead by 3 points.

Creggs were on the backfoot at this stage, and two additional penalties by the surefooted O’Connor gave Monivea a 9 point lead heading into the final quarter.

Shane Purcell kicked a long-range penalty for Creggs in the 68th minute and from then to the finish, the game was played almost entirely inside the Monivea half. Time after time Creggs were held up just short of the line, with Monivea content to concede a high number of penalties in a desperate effort to hold on to their lead.

The referee finally blew for full-time much to the relief of the home supporters who witnessed a superb defensive effort as Creggs threw everything into attack but could not get through for the late try. Creggs remain eight points clear of third place Tuam.

This weekend, the Creggs Under-20’s and Development squads train at 8.15 pm on Friday evening on the 4G Pitch. The First team have a rest weekend and will play a friendly against AIL side Tullamore RFC on next Tuesday evening.