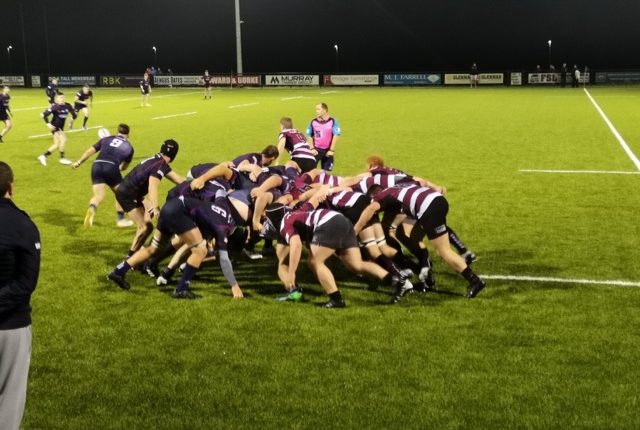 With the three opening rounds completed and three wins, Creggs First Team are in second place, two bonus points behind Connemara and ahead of Sligo and Tuam in a tightly packed top half of the League. Creggs has by far the best defensive record in the league but but has scored the least of the top four teams, and hasn’t picked up any winning bonus points.

Played in perfect conditions on the 4G pitch, Creggs led from start to finish and the result was never really in doubt as Westport’s conversion of their injury time try was literally the last kick of the game.

An early Shane Purcell penalty put the home side in front but despite a monopoly of territory and possession, some handling errors, opposition turnovers and penalties conceded saw a number of promising attacks come to nought and it was on the stroke of half time when Creggs pulled ahead, with superb work by Peter Lohan on the half way line starting a move which finished with Kevin Gavin crossing for the opening try, Purcell landing the conversion to leave his side 10-0 ahead at the interval.

Creggs continued to monopolise in the third quarter but against a resolute defence found scores hard to come by – they looked to have scored a second try when Gavin, in blistering form, scorched up the right wing and was headed for the posts when called back for a foot in touch. Eventually on the hour mark Creggs did add their second try when Maurice Buckley finished off a rolling maul at the corner flag and Purcell landed a magnificent touchline conversion.

All this time however the penalty count continued to rack up against Creggs and with both Shane Purcell and Shane Dowd sent to the bin in the closing stages, for the second week running Creggs found themselves with thirteen men defending their line before conceding a converted try in the dying seconds.

Unfortunately, the referee has to accept a lot of responsibility for this game failing to flow with numerous penalties and far too many stops and starts.