Creggs RFC played host to a touring side from the USA last Tuesday night in Creggs. An Under 13 and 15 side from San Diego Mustangs are on tour in Ireland and even though out of rugby season over 50 players turned out for these challenge games. Our U13 boys played played some decent rugby to start but it was clear that the visitors were a well drilled outfit with some excellent players. We struggled to contain their marauding number 8 early on and Brian O Connor had to make a last ditch tackle to keep our line intact. On 8 minutes the ball was moved out wide to Sam Walsh who looked up to see his wing covered. However he cut inside and despite receiving the ball on our own 10 metre line he ended up touching down under the posts allowing Harry Waldron tap over the conversion. 6 minutes later and Walsh once more touched down and increased our lead to 12. The visitors got a foothold again and crossed 3 times before the break leaving the half time score Creggs 12 Mustangs 17.It looked like we were going to struggle to keep with the visitors in the second half but with a finisher of Sam Walsh’s ability there is always a chance. Sure enough Walsh again broke through the defence to touch down for his hat-trick 5 minutes into the 2nd half. Harry Waldron nailed a tricky kick to restore the lead. A massive defensive shift led by the brave tackling of Kian Hughes and Joseph McSharry and some great steals from Cathal Mulry and Oisin Connolly left the game finely balanced. Replacement hooker Niall Timon somehow managed to keep his feet and extend our lead with 10 minutes left. Waldron’s 3rd conversion had 9 points between the sides. The mustangs then camped in our 22 and eventually breached the line with 5 minutes left. The conversion made sure that there was a grandstand finish on our hands with just 2 points between the sides. A huge effort kept the visitors out and when Cathal Mulry secured a turnover under our posts with the clock in the red the lads were duly rewarded for their efforts. The final score was Creggs 26 Mustangs 24. The result was tainted however during a tackle with only minutes remaining where our flying winger and Player of the Match Sam Walsh received an arm injury and had to be taken off. . Everyone involved with the team wish Sam a full and speedy recovery and thanks to those who attended to him on the evening.

Panel: Declan Hoare, Davy Fetherstone, AJ Tully, Kian Hughes, Dara Killeen, Cathal Mulry, Joseph McSharry, Robbie McArdle, Patrick Murray, Harry Waldron, Sam Walsh, Jack Lally, Daniel Nerney, Raymond Mullin, Brian O Connor, James Murray, Andrej Anic, Oisin Connolly, Fionn Heavey, Connor Hannon, Sean Richardson, Niall Timon.
In the under 15s game the visiting side were physically stronger and Creggs with a mixed Under 14 and 15 side struggled to keep the game even. Those watching the game spoke of the high level of skills involved with both side and an enjoyable match finished with the San Diego side 10 points clear. Thanks must be given to Ken Loughrey and  Luke Gregory our referees who were outstanding and highly praised by the visitors.
Video shows 1st try scored by MOM Sam Walsh.
Photos show both sides including one with Referee Luke Gregory. 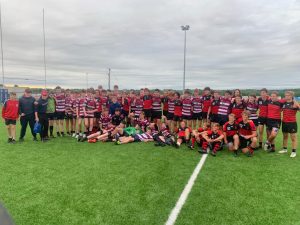 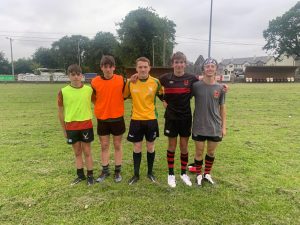