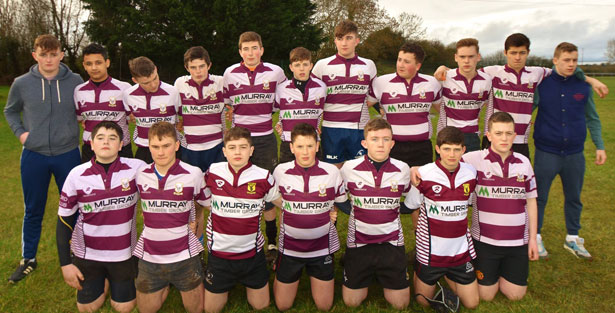 An understrength Creggs Under-16 team traveled to Bucaneers RFC for the first round of the connacht Under-16 Cup last Saturday afternoon and put in a great performance going down to a very strong Buccaneers outfit by 22-17. Having given up home advantage for this cup encounter and short a few through injuries the Creggs squad was reduced to 16 players for this tie and they lost Conor Downey after a couple of minutes to a hamstring injury, so the boys can be very proud of their performance on the day.

Buccaneers who already in the league final and one of the favorites for the cup started the game well and took the lead after 4 minutes through a Nathan Horan Penalty and followed that up after 9 minutes with a try from Adam Murtagh to take an early 8 -0 lead. Creggs were playing good rugby and up front Michael Kelly, Tom Farrell, Mathew Curley and Amuray Duarte were very prominent and out wide Dylan Horan and John Martin were getting around the Buccaneers cover at every opportunity.

The critical point of the game came just before half time when Tim Lambe hit the crossbar with a penalty for Creggs and from the breaking ball, Buccaneers broke down field and scored a try through Dara Mulvihill which Nathan Horan converted for a 15-0 half time lead.

Things got worse for Creggs from the kick off when they failed to gather a kick off and Conor Rohan Touched down again converted by Horan for a 22-0 lead. Creggs never stopped trying to play the right type of rugby and would have been forgiven for dropping the heads at this stage as they had no reward for their endeavours but they continued to attack and Jack Keegan, Mairtin Quinn, John McDonnell and Killian Higgins were now getting the better of their opponents up front.

Aodha Hession was making very good decisions from 9 making breaks himself and also releasing Tim Lambe , Mark Purcell, Aidan Connelly , Juan de la Campa and the other Creggs backs when the time was right. Creggs got their first score after 10 minutes of the second half from Dylan Horan after Amuray Duarte was just held up short, they quickly followed that with a try from Aodha Hession and conversion from Mark Purcell which reduce the deficit to 22-12.

With 5 minutes left Creggs got in for their 3rd try again through Hession in the corner which further reduced the deficit to 22-17. Buccaneers were now clinging on in a game they would have expected to win well and had the benefit of a strong bench to see out the last few minutes with Creggs continuing to put them under pressure right to the final whistle.

Well done to the lads that played on the day and the future looks very bright with the quality of rugby they showed on the day. Creggs Under-16’s will now enter the Plate competition and hope to get a good run in that.