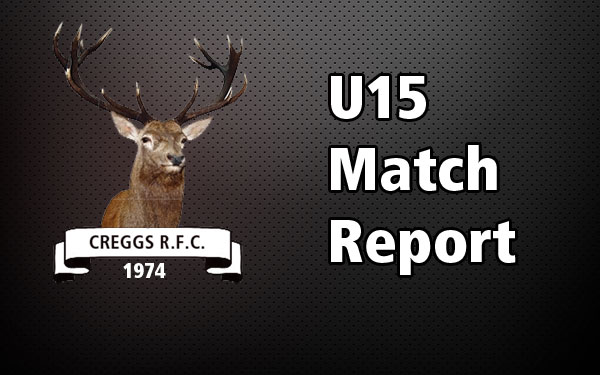 Creggs Under-15’s having qualified already for the League Semi Finals, played their last league game against Ballinasloe RFC last Saturday morning in Creggs, coming out with a hard fought 26-19 victory.

Creggs started the game well with good carries from Michael McAteer, Lee kilcoyne, Aidan Hoare, and Miquel Arthur and got in for a try from Tomas Tiernan which was very well converted by DJ Hession for a 7-0 lead after only 5 minutes.

Ballinasloe then used their big ball carriers and had the majority of the possesion for the following 10 minutes and got in for well taken try to level the game 7 – 7 after 15 minutes.

Creggs went back on the attack from the kick off and Ciaran Purcell got in for a try in the corner to restore the Creggs lead to 12 -7 but Ballinasloe finished the half stronger and got in for their second try to lead 14-12 at half time.

Ballinasloe again started the second half better and goti n for another try after 7 minutes to lead 19-12. Creggs then started to eventually take control and some brilliant carries from Noah Fallon, Kayk Oliviera, Aindriu Oates up front and Edimar Fimho and Josh Verling out wide gave Creggs good territory.

Ciaran Purcell got in for his second try after 15 minutes after intercepting the ball from the back of a lineout and running 35 metres to the line. A little later, Tomas Tiernan got in for Creggs fourth and his second try under the posts, which DJ Hession converted 5 minutes from the end to give Creggs a 26-19 lead.

Ballinasloe did have one last attack and Cormac Feeley, Cormac Dolan and Senan Lambe did well in defence towards the end to make sure Ballinasloe didn’t get in for the score.

Creggs Under-15’s will now have home Connacht League Semi-Final, scheduled to be played on next Saturday week, January 26th. If Buccaneers defeat Ballinasloe next weekend, they will provide the opposition. If Ballinasloe win that one, it will be Galwegians that Creggs will play in the Semi-Final.
Also, in the Connacht Under-15 Cup Draw, Creggs will be away to NUIG on February 23rd. Well done to the Under-15 players and coaches – we wish them well in their upcoming big games.