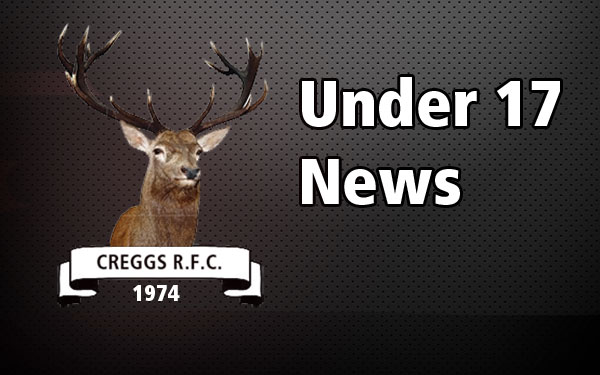 Creggs Under-17’s continued their unbeaten start to the season with a 35-14 victory over Claremorris/Tuam RFC lat Sunday morning in Creggs.
On a beautiful day for running rugby, Creggs played the first half with the wind and played the ball through the hands at every opportunity even from within their own 22′ which made for a great spectacle. Creggs got tries in the first Half from Jack Tucker, Ciaran Corcoran and Ben Finnerty as well as a penalty and conversion from Mark Purcell to have a half time lead of 20-0.
Upfront Creggs were excellent in the set piece from Ronan Lambe and Tiernan O Sullivan and Conor McNulty, Adam Donnelly and Lorcan Maher carried very well, while Ethan Glennon was very good link between backs and Forwards. Cian Glennon ran things very well from 10 and with Mark Purcell and Jack Deegan in the centre opened up the play very well, spreading the ball to the wings whenever possible.
The second half Claremorris /Tuam played with the wind and put more pressure on the home team, however it was Creggs who settled first and scored a try through Ciaran Corcoran to stretch the lead to 25-0. Creggs began to make a few mistakes then and a few penalties and dropped balls allowed Claremorris/Tuam to get into the game and the got a deserved score to bring the score back to 25-7.
However Creggs regrouped and a fantastic break from Aaron Lyons, who raced 60 metres before offloading the ball to Rory Callaghan to score and then a few minutes later another good back move from within their own 22′ again released Lyons and after the ball went through numerous hands, a after a good carry from Kian Moran and Andrew Naughton, and Mark Dowd swept the ball to the right and then all the way left for Darren Gately to go over in the corner to make the score 35-7 with time running out.
Claremorris did get in for the last score of the game to reduce the deficit to 35-14 but the Creggs lads will be happy with their days work but have a tough encounter with Sligo away in two weeks time.
Creggs Rugby: Darren Gately, Aaron Lyons, Jack Deegan, Shane Connaughton, Ben Finnerty, Andrew Naughton, Mark Purcell, Conor McNulty, Kian Moran, Ronan Lambe, Ethan Glennon, Ciaran Corccoran, Tiernan O’Sullivan, Rory Callaghan, Lorcan Maher, Adam Donnelly, Mark Dowd, and Cian Glennon.