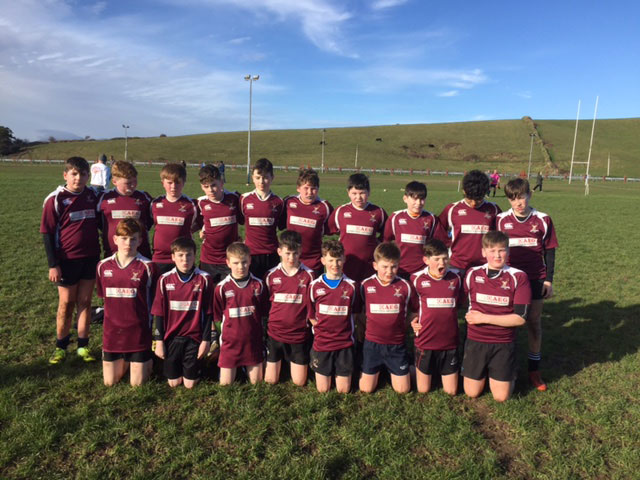 Last Wednesday night under the lights in Creggs, our Under-13’s played a very fancied Ballinasloe RFC side in their Connacht Cup Quarter Final.

Creggs Under-13 team pictured at a recent away win in Westport.

The game could not have began worse for the home side with Ballinasloe RFC running in a try almost directly from the kick off which was converted to give the visitors an early 7-0 lead.

Creggs settled and got back into the game, and at the 18 minute mark, when after good work from Lee Kilcoyne, Michael McAteer and Edimar Fimho up front Creggs moved the ball wide to Tadg Lyons who used his pace to make 20 metres before being hauled down and Jack Flemming was on hand to score which Cormac Dolan converted to level the scores.

Ballinasloe then gathered the kick off and some poor tackling allowed them to run in a try in the corner to regain the lead just before half time.

Creggs began the second half very well and had the better of territory, making their pressure tell after 5 minutes when Aodhan Looby burst through the defence to touch down which Dolan again converted.

Creggs continued to press and were again rewarded when Creggs tuned the ball over at scrum time after 10 minutes and Ciaran Purcell picked from the base and scored in the corner to give Creggs a 19-12 lead.

Favourites Ballinasloe were now staring at a defeat and were forced to get their big ball carriers involved to try and break down the Creggs defence and were rewarded with 10 minutes to go with a try to reduce the deficit to 19-17.
They then looked to have won the game when they scored a drop goal with only 4 minutes remaining on the clock.

However, Creggs were not to be denied and they went back on the attack and were awarded a penalty which Cormac Dolan converted brilliantly from a difficult angle with the last kick of the game.