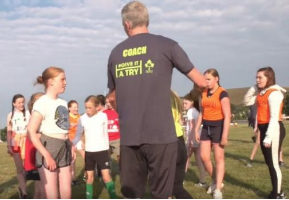 ‘Give It A Try’ or GIAT is an 8-week programme (in May and June) run in selected clubs where girls aged 8-14 years can attend in order to learn how to play rugby in a fun environment.

Dave Purcell, Head of Girls’ Rugby, Creggs RFC says: “Last season we took part in the Give it a Try Programme for the first year, We found the resource packs of great benefit in having a programme to guide us week by week and it was of great benefit to the club in boosting the number of girls playing rugby especially between the ages of 10 and 13, giving them a good grasp of the basics of the game in a very fun environment. The added bonus for us as a club was that it enticed new coaches into the club which was very welcome.”

The programme consists of a coach education element, fun rugby sessions, teaching the girls the basics of rugby and culminating in a Provincial Blitz Day. The clubs are responsible for the running of the programme in their area but with Provincial Branch and IRFU assistance.

What are the aims of GIAT?
It aims to create new teams or the strengthening of existing teams in clubs. It also provides a fun, 8-week (one session per week for 8 weeks in May and June) programme of rugby activities to attract girls aged 8 to 14 to the club. It supports a club in increasing their number of players and integrate those new players into existing teams. And it aims to develop athletic and social skills for girls in a safe and nurturing environment, and at the same time, itodevelop coaches, by running a successful 8-week programme and to sustain the players through to the regular season.

The initiative has grown from strength to strength in recent seasons with a 65 per cent increase in participating clubs last year. Over 2,000 girls with no previous experience in rugby have taken part in the 8-week programme in the last two years.

This year Give It A Try will be open to girls aged 8-10 for the first time. The programme is designed to kick start the participation of girls up the age of 14 in clubs and boost existing playing numbers by attracting new players with a fun introduction to the sport.

“Give It A Try is helping to make rugby clubs more sustainable across the four provinces,” Women’s Development Manager Amanda Greensmith told IrishRugby.ie.

“These young girls are excited to get involved in rugby. Clubs are reporting a welcome boost in membership subscriptions but we’re also seeing new teams popping up and a fresh influx of volunteers. The players are so enthusiastic about rugby that more parents are becoming active in the club for the first time,” she said.

Creggs are one of the clubs who successfully ran the programme in 2019. Their Head of Girls’ Rugby Dave Purcell says the resources available through the programme were of particular use.

“We had a week-by-week guide and it was of great benefit to the club in boosting the number of girls playing rugby. It gave them a good grasp of the basics of the game in a very fun environment. The added bonus for us as a club was that it enticed new coaches into the club which was very welcome.”