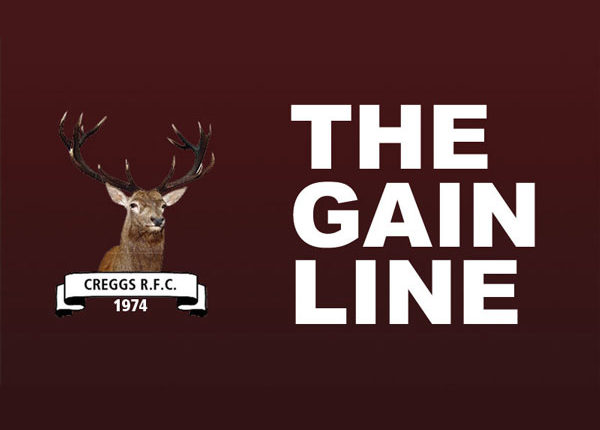 On a brutal night for rugby but Creggs took the spoils from Dubarry Park but the contest was closer than the scoreline suggests. Creggs were short a few regular squad members and Buccaneers started their strongest J1 team of the season so far.

Creggs defended brilliantly to keep the home side scoreless, particularly for a a twenty minutes period in the second half and also added eight points after half-time when playing against the raging elements.

Despite playing into the wind Buccaneers had the better of the opening exchanges before Shane Purcell landed a penalty goal for the visitors on thirteen minutes. The resulting low flying kick off saw two players leave the field, Creggs Alan Brandon and his opposite number Tom Gilheany thankfully got up from a nasty ground level knee to knee collision but Brandon had to leave the field immediately with Gilheany following shortly afterwards.

The conditions made running rugby almost impossible and you could see the frustration building up in the Creggs backs who now had the monopoly of possession thanks to dominant forwards but were unable to extract any dividend.

Purcell increased the Creggs lead with a penalty goal in the 26th. minute and just before half time, he spurned another shot at goal in favour of a kick to the corner which ultimately yielded a try between the posts from Aidan Leech, which Purcell converted to leave Creggs deservingly 13-0 ahead at the interval.

Now facing into the driving wind and rain Creggs were afforded another penalty chance five minutes into the second half which Purcell duly slotted but Buccaneers had thirty five minutes to claw back that lead and set about doing so with a sustained series of attacks inside the Creggs 22 for close to twenty minutes. Creggs managed to brilliantly repel with strong scrummaging and tackling and a number of relieving clearances from scrum half Eoghan Coyle.

Coyle was unfortunate when the referee failed to play advantage as he gathered a spilled ball in the tackle and looked set for a potential breakaway try but the referee called a Creggs scrum immediately, which left them back in the danger zone.

Creggs showed tremendous discipline as they were running down the clock, had very much the upper hand in a series of punishing scrums and eventually lifted the siege through a breakout by the newly introduced Danny Arnold and carried on by Tom Fleming.

The latter, who along with Leech and others had been a powerhouse throughout, surged through the middle of the park and this set the platform for a series of drives from Maurice Buckley, Elliot Jennings, Eoghan Farrell and Fleming again into the home side’s five metre line. Quick recycled ball from Coyle ended with full back Shane Dowd crossing in the corner to put even a losing bonus beyond Buccaneers reach with four minutes remaining. It finished with Creggs taking the spoils on a 21-0 scoreline – a great team performance!

This Sunday Creggs travel to Clifden for a top of the table clash with the Connemara All Blacks who on Sunday notched up another bonus point win away to Sligo. This leaves the Blacks six points ahead of Creggs so anything other than a Creggs win will leave Connemara very much in the driving seat as they bid to retain their league title.

With three wins from three in their last Connacht J1C League games, the Creggs Development team travel to Galway to play OLBC in the Sportsground next Saturday evening – KO 7.30pm. This is the final Connacht League match for the Development team before the Christmas break.

Formally the Second team, the new Development squad structure has been transformed this season into a successful structure. In addition to a core squad, it also gives the younger Under-20 players plus a strong mix of returning players, others new to rugby, and first team players returning from injury and regaining fitness and form – all the opportunities to impress.

The first team has seen the benefits of this stronger development squad and the good work being done by the coaches. The management team continue to welcome new and returning players to come along and train with the squad – Contact: Kevin O’Rourke, Mattie Corcoran, Paul Turley, Sean Brandon, or Vincent Collins.

Creggs Girls for Under-16 League Semi-Final

Creggs RFC Under-16 Girls secured their place in the Connacht Under-16 Division 1 League Semi Finals with a 25-5 victory over Sligo last Saturday in Creggs. The home team scored five tries on the day through Roisin Maher, Sarah Purcell, Eadaoin Walsh, Siofra Hession and Rachel McDonald.

The semi-final of the league will take place on the weekend of Jan 5th and the opponents will be clearer when the other teams finish their remaining games.

Well done to the Roscommon CBS Junior team who made it through to the Connacht Junior A Schools League Final last week in Creggs.

Played in awful weather conditions on the 4G pitch, the game v Summerhill had to be decided by a first try scored rule which put CBS through.

Good Luck to our Creggs Under-16 Boys who will be playing with CBS Roscommon this Thursday in the Connacht Schools Junior A League Final against Garbally College in Tuam at 12 Noon and also for St Mary’s Ballygar V Gort Community School on Thursday at 11.30am in the Connacht Schools Junior C League Final. The St. Mary’s Ballygar Final will be played on the 4G Pitch in Creggs.

Cregsg Under-15 Boys travel to play Buccaneers RFC next Saturday at 12 Noon.

Creggs Under-18 Girls play Buccaneers RFC on Wednesday night at 7.30pm in Creggs.

FRIENDLY GAME:
Creggs Under-14 Boys play Carrick on Shannon on Tuesday night at 7.30pm in Creggs.

Creggs Girls Rugby Training every Monday night for Under-14, Under-16 and Under-18 Girls at 7.30pm in Creggs.

This coming Saturday, all Creggs Mini Rugby Teams (Under-7’s, Under-8s, Under-9s, Under-10s, Under-11s, and Under-12’s) will take part in a Blitz hosted by Ballinasloe RFC.
Everyone on the pitches in Ballinasloe and ready for 10.30 kick-offs please. 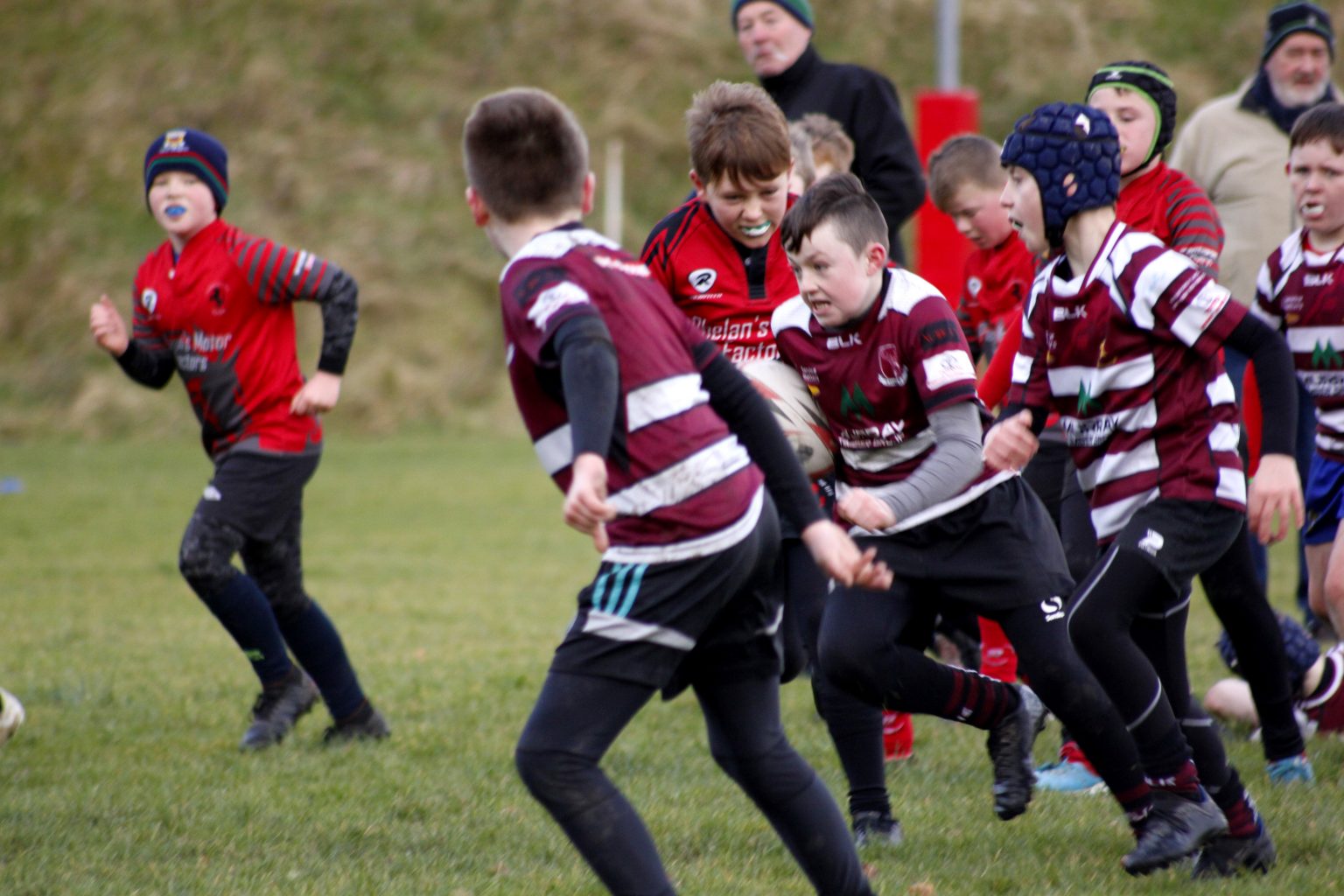 Picture showed a representative from Connaught Rugby asking the young players their views after the games in Claremorris. The initiative by Connaught Rugby of ‘Silent Sidelines’, where no coach or parent speaks to players while the games are on. They can instruct the players only before their game and again at half time.

Creggs MINI Rugby always welcomes new players. We will have boys and girls teams from Under-7 (six year-olds) through each year up to Under-12’s. Come along and try it out on Saturday mornings when there isn’t a Blitz on. Registration is available on-line and the new season that will run through to April 2020.

Parents welcome to help with coaching