After a blistering start Creggs made heavy weather of securing a winning bonus point against Corrib at The Green on Saturday night but Mikie Blighe’s try 2 minutes from time finally closed the deal. Creggs were 12 points to the good inside 15 minutes thanks to two tries from second row Kevin Brandon, the first almost straight from the kick-off. Out-half Mark Brandon was successful with his first conversion attempt and in between the two opening tries full-back Elliot Jennings also crossed the line but was adjudged not to have grounded properly. Creggs were threatening to run riot at this stage with Corrib completely shut out of the game and Mark Brandon added a penalty goal 5 minutes later.

The second quarter was marked by some very impressive running from right wing Eoghan Coyle, more accustomed to the no. 9 jersey and making his first senior start and also from Jennings whose every entrance into the line spelt danger for the opposition. As an indication of things to come however Creggs failed to find any further cracks in the Corrib defence until No. 8 James Brandon, also making his senior debut, crossed near the posts just before half time with Mark Brandon adding the conversion to leave his side 22 – 0 ahead at the interval.

The only issue which remained to be settled was whether Creggs could add a fourth try and secure the bonus but the second half brought very little joy to the home supporters until Blighe cracked it at the death. Corrib were an entirely different proposition after half time and although Creggs still had a monopoly of good possession a combination of poor decision making on their part and stout defence from the opposition left the home side increasingly frustrated as the clock ran down. Corrib were not without their chances during this period and the Creggs defence was not found wanting with captain Tom Callaghan showing great resolve in thwarting a Corrib kick and chase which had try written all over it.

Other good performances throughout came from second row Brian Donoghue, wing forward Alan Brandon and after he came on hooker Owen Kelly put in an impressive defensive shift as Corrib battered the home line but ultimately failed to get any return for their valiant second half effort.

This Saturday Creggs are at home to Castlebar in their second League outing, kick-off at The Green 8.00 pm.

Creggs Rugby Club is based in the village of Creggs 15km from Roscommon Town. Rugby is a popular sport around the world, played by male and female players of all ages.

Creggs Rugby Club is very much a community based club drawing from the region and surrounding towns. We have a wonderful social side to our club and promise that all new players will be warmly welcome to a friendly and well managed sporting environment.

If you are interested in playing or just would like to sample the sport this season we are delighted to have partnered up with Roscommon Town Community Sports Park in Lisnamult for training while all matches are played on “The Green” in Creggs Village. 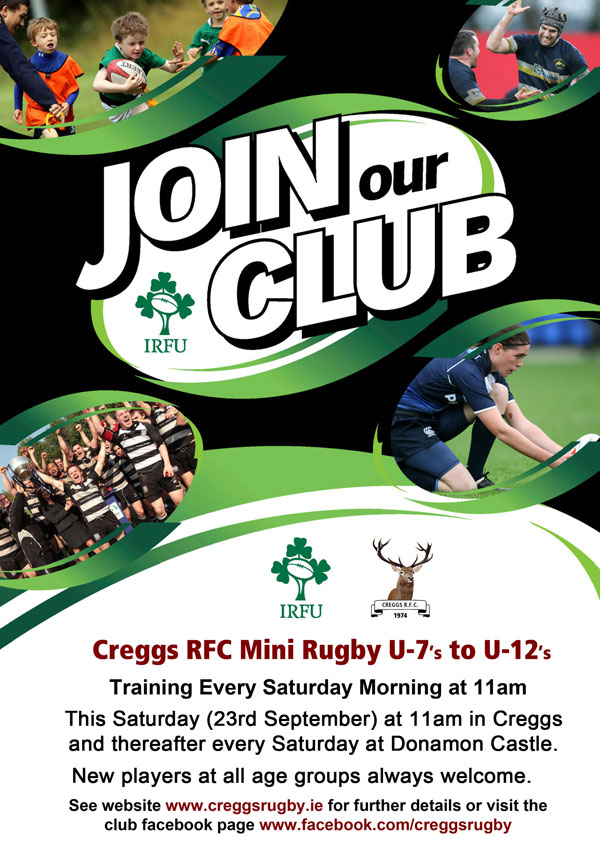