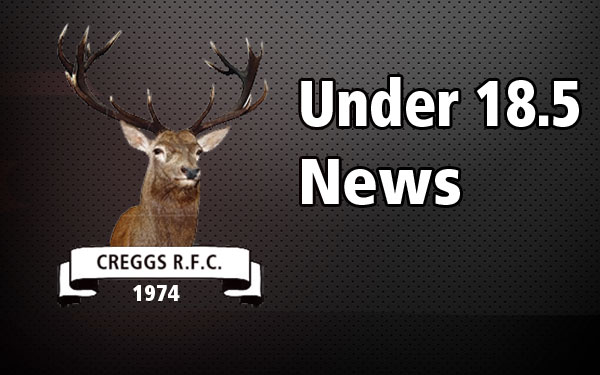 Creggs RFC lost their unbeaten record to Ballina RFC in a tight encounter on Sunday afternoon in the u18.5A league. Ballina playing with the wind took the lead after 5 minutes with a converted try but it was Creggs who were playing the better rugby and up front Brian Maloney, Danny Arnold, Adam Finnerty and Killian Higgins were making good ground and out wide Shane Purcell, Eoghan Coyle and Mairtin Quinn were breaking the tackles to create space. It was a break from Shane Purcell, Which was carried on by Finnerty that led to Creggs opening score when Tim Lambe fed Aaron Glennon who offloaded well to Mark Purcell to score in the corner. Aodha Hession scored the second try from close range which was converted by Shane Purcell to give Creggs a 12-7 half time lead.

Creggs turned around with the wind dying down and they had the better of the early pressure but frustratingly were continually penalised at the breakdown to allow Ballina to kick their way back up the pitch and secure territory. In fairness to Ballina the tight forwards game suited them and they took their scores well to eventually lead 22-12 before Mark Purcell went over for his second try to reduce the deficit to 22-17 with time up.

Creggs will play Galwegians next week in the league. Training continues Friday at 8pm.